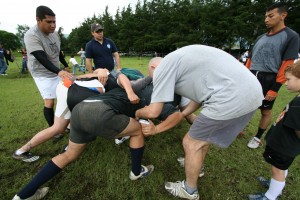 I’m pretty convinced that the biggest challenge of the modern world is focus. There is so much to distract, so many demands being made and people making them, it’s usually an effort to focus and achieve what you want to.

When I worked at Plymouth University I was involved in some workshops on app development for teenagers. These weren’t delivered by school teachers, but by students studying on the exciting ‘Interactive Games’ course lead by Dan Livingstone.

As well as teaching the skills of programming and Computer Science, Dan’s course taught a particular way of working common in the software development industry called ‘Agile Project Management’. It stuck with me, and I have been trying to implement some key principles in my own life.

Agile is designed to produce results when working with clients with complex demands and often little understanding of the reality of achieving them. It protects teams from constant demands by having them work in sprints. A set of objectives is agreed, a time frame for achieving them also, and then they sprint.

They get on with it, and they stop listening to the demands for a set amount of time. Teams usually have someone appointed as ‘scrum master’ whose main function is to protect the teams that do the work from the constant demands of clients.

Once the allotted time is done, they stop and review in what is called a ‘scrum’. Then they can present what they have done to clients and get feedback, as well as new priorities that have emerged while they were head down. They agree the next set of objects, and the heads go back down, iterating but focused.

It’s so easy to get completely waylaid by competing demands these days. I actually find that I’ve been inducted into this and internalised it. I make competing and constantly changing demands of myself.

This year, I am trying to set myself sprints. Agree a core set of things I am going to focus on for a set amount of time. Ignore new ideas, or at least note them down for later, then ignore them. Get to the end of the allotted time and review, bringing in these ideas, and set the agenda for the next block of time.

Is it working? It’s too early to say, but I’m hoping that this approach might help manage the complex and shifting demands I always seem to have and respond to them with the focus that complex things need.