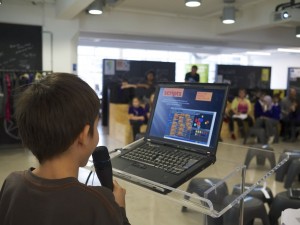 For some time there has been a growing movement of teachers sharing their practice, informally in their own time, motivated by a desire to learn from each other and bring the best ideas back to the young people they work with. The TeachMeet wiki now shows events happening across the world; with a self organised and almost viral ethos of learning. teachers learning from each other is great, but what about children? Whilst many are sharing their ideas and their learning through class blogs, there is something about face to face events which still makes them incredibly powerful.

Last Friday I was privileged to join groups of children from eight schools at the Wayra startup accelerator in London for just such an event. The team from ‘The Night Zookeeper’ created the event for children to join them in their world of startup technology companies, and share the projects they had been working on in their schools.

All the groups were ‘Digital Leaders’ at their schools, and no strangers to teaching their teachers how to make best use of the latest technology. Throughout the day they presented the projects they have been working on, which ranged from programming computer games with MIT’s ‘Scratch‘, to using online tools for learning. I was blown away by the quality and confidence of the presentations, particularly one group for whom the loss slides presented no obstacle, and another who did a live demo of how to use Movie Maker to create plasticine animations.

Later in the day a number of technology startups presented their businesses to the children for feedback, and received a range of interesting questions and observations. As the children were presenting in their offices many of them came along to watch, and I lost count of the number of amazed faces I saw, and enthusiastic comments I heard about the quality of the children’s work.

After an informal lunch where children blogged about their morning and interviewed each other on audioboo, the afternoon was largely dedicated to workshops with children collaborating with others from different schools. The children had a go at programming a ‘Raspberry Pi‘ computer using ‘Scratch‘, blogging and live writing, and using a ‘MaKey MaKey‘ to use vegetables as a keyboard for their computer. Not all the activities were technology focused, and there were some wonderful artistic activities going on including a collaborative mural attempting to represent the sea without the colour blue.

Throughout the day there was a real buzz as the children explored the offices, chatted to the entrepreneurs there, and shared their ideas and experiences with the other schools, and the world via their impressive live blogging. For a day they were immersed in the world of tech startups, and treated like one of the teams. Teacher Sheli Black burn said:

Seeing these children using technology for their learning was inspiring, but for many of them it was more about the people. For Roydon School pupil Leah the best part of the KidsMeet was ” because you got to meet other children”, and it was the atmosphere of collaboration and camaraderie between children from different schools, and the adults from The Night Zookeeper and Wayra that struck me about the day.

Sharing and learning from people online is hugely powerful, but there is still a great place for face to face events which build on and cement this power. Just as teachers have found with TeachMeet, KidsMeet is a powerful format for sharing learning.

For more, take a look at the Digital leader network blog, where the children live blogged and posted audioboos throughout the day, the Flickr of photos from the day, and details of forthcoming similar events on the KidsMeet wiki.