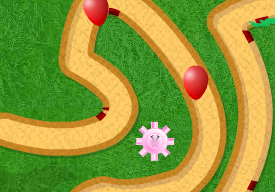 After giving kudos to the children who were so clearly articulating the learning in the game ‘Bloon tower defense 3’, this has in some ways come back to haunt me this week.

After discussing with the whole class the learning they had identified, and putting their video on the class blog I ended up with a class in which all of the boys were choosing to play this game in their independent time. When asked what they were learning they were able to reply ‘how to handle my money’. However, I felt that for many of them this was a learned response that would allow them to ‘get away with’ playing on the game without deeply considering the learning.

I have to admit, this made me wonder if I should backpedal a bit… worrying I had given them permission to play on a game with little intellectual challenge going on. I considered ways to proceed, and though perhaps I should try to harness their interest in the game to make it a ‘contextual hub’ for other learning activities, as has been done to great effect by Dawn Hallybone and Tom Barrett.

I prepared some ideas, such as asking them to review the game or write some instructions for following particular strategies. I then brought this to a discussion with them, where I put across the idea that some things only have a good learning value for a certain amount of time.

When asked for ideas on how they could extend the learning they were getting from the game one child came up with an excellent idea. He suggested they could define two different strategies, and then use two computers to test side by side which one was most effective. They could then devise the most effective strategy through a process of elimination.

I am putting my ‘extending activities’ to one side for now, it seems that they can think up much more interesting ideas just using the game.