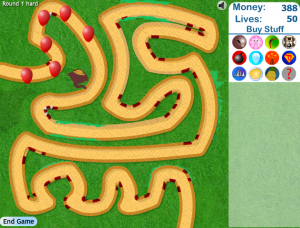 Since January we have been working on a new focus for the first half hour of our school day. ‘Independence time’ has been set up across the school to promote independent learning skills by giving children a free choice of how to use their time, and opportunities to reflect on what they have been learning.

We have had a number of conversations in this reflection time about activities on the computer, and what learning has actually resulted from some of the activities and games the children enjoy playing. Some of these began quite tongue in cheek, as children related that they were learning how to play the game in question. This actually resulted in some interesting conversations, with one child decided that ‘you are learning when you do anything really’. Despite this potentially profound statement, we came to an agreement that they needed to be able to demonstrate they were learning something ‘worthwhile’ in this time.

Unfortunately, having come to this conclusion, I have seen that children of this age can be quite blinkered in their interpretation of what learning can be. Having agreed on a rule such as this, the eagerness to conform to it can result in it being applied quickly, but before any deeper thinking has taken place.

I have therefore been trying to take as many opportunities as I can to discuss possible lines of development and learning with them. I can see our ‘rule’ creates a possible temptation to choose lower level tasks where they can easily demonstrate the learning purpose , rather than something for which it is harder to articulate.

I had an interesting moment this morning when I approached two boys who were playing what appeared to be a fairly un challenging computer game. When I asked them what they were learning the replied ‘strategy’, something I initially took to be a response to try to ‘get away with’ playing a game. I am glad I spent longer talking to them, as they really were developing an involved strategy, and were quite clear about what they were learning from a game that was more complex than it at first appeared.

Perhaps I should given them more credit for their ability to think abstractly about learning.