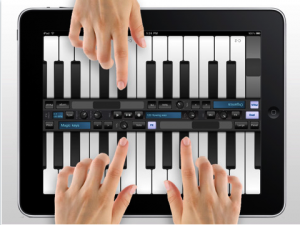 This morning I attended an event run by a local Apple vendor aimed at showcasing the educational uses of the iPad. I have already blogged about my initial reservations about this device, not merely as a device for education but also as a means of framing users interactions with the internet. Today we had a couple of hours to have a go with the devices, and a presented from an ‘Apple Distinguished Educator’ about possible uses in schools. As this was one of the first education showcases I thought I would share the thoughts we had whilst using it.

Firstly it is undeniably a very nice piece of technology to use. The screen is great, really big and really clear, and fingerprints did not seem to be much of an issue . It is really fast, noticeably snappier than my iPhone 3G, and the netbooks we have in my class. It feels really solid and well built. The keyboard is quite easy to use, although it is difficult to type without resting it on a surface and using both hands.

Whilst the device might be great, as with most hardware it is really the software that makes it, and there were some interesting apps on show. RJDJ was a very interesting experience, allowing the user to manipulate sounds in a very intuitive way that could really help develop listening and composition skills. Maps looks great on a screen this size, and can easily be used between 3 or 4 people at the same time in the middle of a table. The new iWork apps were fairly good for a ‘mobile’ device, although I couldn’t find any way to significantly change fonts in Pages, so they are more limited than ‘real’ versions.

There are, however, significant practical issues which I think make school use problematic. Firstly the price, you could get two very capable netbooks for the price of one these things. Secondly, as I have already expressed, they are devices designed for consumption and content creation is limited in many ways. Thirdly I wonder how durable a large glass screen like that would be. Several netbooks in my class have been dropped this year, and as they are made of plastic and have slight flexibility no real harm has come to them, I can’t imagine a 9 inch sheet of glass faring the same way…

Another limitation is the inherent nature of a touch browser. We use Wallwisher a lot in our school, and whilst at the event I logged into a wall my class was working on with their supply teacher. Unfortunately the website was unable to register my dragging around messages, or the double click required to add new messages to the wall. It seems some mouse driven websites do not translate well to a touch interface. I was also disappointed that Google Docs cannot be edited, only viewed on mobile safari (hopefully only a matter of time).

Apple prides itself on their design, they do not merely produce machines, but fully rounded products which (allegedly) fit into people’s lives. They use this to justify what some people criticize as their limitations and lock downs, after all the iPad is not meant to be a fully functional laptop replacement, but a lifestyle device, and they appear feel this justifies gearing it totally towards content consumption. Therefore, I cannot help feel that them pushing the iPad for education is something of a contradiction. It is a device designed to belong to one person, to be tied to one email account, to contain one diary, and to sync to one computer. It is not designed to have multiple, constantly changing users with different accounts, it is not designed to be one of a deployment of 30 which need to have identical apps installed on them. I couldn’t help feeling that most of the talk of the educators I was with today was about ways of working round the fact that the device had been designed in a certain way, and try to shoehorn it into a situation it was not designed for. Now I am all for using technology in unintended ways, but due to the ecosystem Apple have created around their mobile devices they are pretty uncompromisingly designed for a very different usage scenario than a working classroom.

So, it’s a nice device, but I am currently sticking to my initial impressions that this is not a device best suited to education at the moment. However, after some time using the iPad I came across a spark of something that could give it a very beneficial use. This was in the form of a music keyboard application ‘ProKeys‘, a great little app which simply provides a keyboard, and some really high quality sound banks. What really got me was that one of the two keyboards could be rotated 180 degrees so that two people could play with each other using the multitouch capability to allow them to both fully interact at the same time. This made me think of the Smart Table, and all the collaborative benefits that it was meant to bring. What I have read from trial users such as Tom Barrett, suggested that whilst the hardware was capable of this, the software really wasn’t up to scratch. However, imagine a device with this multitouch capability, added portability, and the ecosystem of Apple’s ‘App Store’ providing a daily evolving set of software and we might just have something quite exciting. If software providers can develop this path of genuinely collaborative applications designed for interaction from multiple people, the iPad could be a really interesting device, especially in the Early Years and Key Stage One. Rather than being some kind of netbook replacement this avenue could allow iPads in schools to be the genuinely niche devices that Apple depict them as, but with a real value for education.

Ultimately it is all about the Apps, and as with any new device these are just getting started. I will be very interested to see if developers catch on to this potential for collaborative learning, and if they do it might just be worth working round the ‘limitations’.

3 thoughts on “iPad in Education Event”