During my training last year by far the most talked about of the ‘dreaded’ TDA tests was the I.C.T. test. This test involved completing a variety of tasks such as answering an email and bookmarking a website under timed exam conditions. All of the tasks were things that my colleagues did all the time- yet they still dreaded this test most of all, and many repeatedly failed it. Chats with those who attended other universities has suggested this situation is not out of the ordinary.

The problem people seemed to have was that the test took place on a made up operating system. 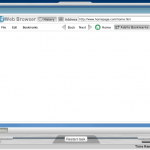 Most people’s complaints seemed to be centered on the argument that the test was not representative of their IT skills as it was an irrelevant system that they were not used to. Whoosh.. there goes the missed point.

After conversations with colleagues at different schools it worries me that many teachers and ICT admins are so reluctant to shift from Windows centric thinking. A colleague I was at University with told me that his school decided to spend their budget on a limited number of Windows machines rather than significantly more Linux ones because, “Linux is for geeks”. This saddens me. Certainly there are issues of support staff needing the skills to do their job (lets hope those are transferrable enough to manage the ‘made up OS’). However, I think it is hugely important for children to experience different systems for them to gain a true understanding of ICT, and truly transferable skills.

In order to develop these ‘portable’ skills and real understanding of IT systems, I really believe children need to experience different operating systems. Someone who has only used one system may easily have got by learning step by step instructions of how to achieve their goals without actually understanding what they are doing, or how the tasks are structured. For example, such a child can learn to find a file by clicking point 1, then point 2 etc, and replicate this every time. To locate that same file on a PC, a Mac and a Linux machine on different occasions requires them to actually think about how the file system is organised, and negotiate it through understanding of the concepts rather than simply learning a procedure by rote. This is a simple example, but as a long time Windows user I gained so much real understanding when I started using Linux and OS X simply because I had to translate my knowledge and skills into a different paradigm.

Surely as schools we should be setting up our systems in the way that has the biggest impact on childrens’ understanding, not that the one that is easiest to manage or conceptualise for support staff. This should be argument enough, without looking at the possible cost savings involved with using Linux based OSes on at least some machines in a school.

I am probably preaching to the converted with this topic on this blog, but I think it is so important that we provide children with a range of ICT experiences in schools, lest they end up like my supposedly ‘computer savvy’ colleagues.

10 thoughts on “ICT skills should be portable”