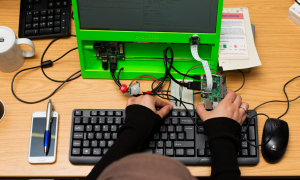 Last year my research assistant Samantha and I travelled around the UK to catch up with teachers who had taken part in Picademy. This is the two day face to face training in digital making education that the Raspberry Pi Foundation provides for educators. We had a fascinating couple of weeks, talking to many interesting educators in schools as diverse as a newly built academy in Scotland and a military school for staff in the armed forces in Devon.

We learned a lot about how educators are developing digital making opportunities in their work, particularly how this happens in schools. As a new and innovative area of learning, educators are coming up with innovative ways of bringing these new opportunities to the young people they work with. Sometimes there are challenges, and finding out about what these are and how people have met them has been really useful in continuing to develop our work and future Picademy events.

You can read the report in full over on the Raspberry Pi Foundation research page.