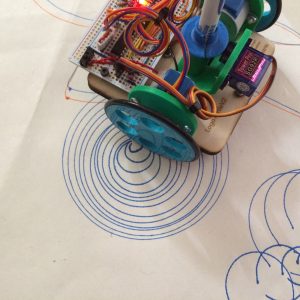 A powerful and hugely ahead-of-its-time programming language for learning, Logo was designed in the late 1960s and spread to classrooms across the world by the 1980s. It’s reach and familiarity today shows how tremendously successful it was, and yet in its goal of fundamentally changing education systems it was almost entirely unsuccessful.

When many people think of Logo, it is the green triangular turtle guided by typed instructions they think of. ‘Turtle graphics’ is so iconic it has become the definition of Logo to most of us. However, Logo was so much more than that, both technically and philosophically.

The name Logo came from the Greek word for ‘thought’. The language was designed as a tool for children to manipulate ideas in the computer, to interact in a concrete way with abstract knowledge. An example of this was discovering the properties of angles by drawing shapes. To draw a triangle a child has to experiment with instructions and work out that the angles must add up to 360 degrees. However, the ‘turtle graphics’ was just one feature of Logo, it was designed to allow children to also manipulate language, with ambitions that abstract knowledge in a whole range of subjects could be explored and discovered with computers.

Logo was also philosophically more than a way of learning programming. In fact, the creators at MIT saw it as a radical educational philosophy. The tools they designed allowed children to learn by exploring sophisticated concepts on their own. Seymour Papert described what he saw as the revolutionary potential of Logo at length in his books, in passages that questioned the very nature of schools and teacher led lessons. He wanted to put learning in the hands of children, empower them to discover powerful ideas for themselves, and he believed that in computers generally, and Logo more specifically, the tool to do this was being developed.

Papert wanted to see Logo in every classroom, and in the USA and the UK this vision was tremendously successful. Descendents of Logo can still be seen in classrooms 40 years later, yet the underlying approach to learning is still something that educations systems are a long way away from.

Why is this? Researchers Agalianos, Noss and Whitty have explored how Logo was adopted over many decades. It seems Logo’s acceptance and success on one level may have prevented its success on another. Turtle graphics was so compelling and powerful for teaching geometry and simple computer programming that it was taken up by education systems as a very specific activity for learning these subjects. Once it had been accepted as such a specific activity, it was very difficult to shift perceptions of it to an tool with much deeper implications.

Learning from the legacy

There are lessons here for educators trying to develop the teaching of computing and digital making in schools. Turtle graphics was easily understandable and educators were ready to adopt it. Yet this level of acceptance made it hard for many of them to see the true potential of the tool they were accepting. As we continue to work to bring the powerful opportunities for learning that computers and programming bring, we should be careful that the ways we communicate this doesn’t undermine the true potential of the tools.

Failure, or just the start?

Some people would say that Logo failed to realise the ambitions of its creators. How you see success depends on your perspective though. Without the huge influence of Logo it seems unlikely that we would have tools such as Scratch that make the powerful ideas of computation accessible to children as young as primary school. Without these tools, would governments around the world realised that even young children can engage with the power of computing and digital making? Would they have moved their school curricula in this direction? If the story of Logo is a 40 year one then perhaps it failed, but I suspect this story is going to be much, much longer…

For more on ‘The social shaping of Logo’, see the paper by Agalianos, Noss and Whitty.

Originally published in issue 1 of Hello World – The computing and digital making magazine for educations. helloworld.cc

4 thoughts on “The legacy of logo”