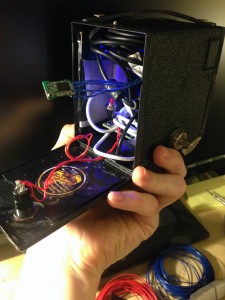 People are increasingly talking about ‘digital making’, but what is it? The world of digital technology is both deep and broad, complex and nuanced. The way we talk about it is still developing, and terms are often used differently by different people. Computer programming has been around since at least the 1840s and Lovelace’s first programs, but the specific language around it is still only really starting to be integrated into popular culture.

To see this you only need to look at the many heated discussions on the use of the terms ‘coding’ and ‘programming’; interchangeable for some people, fundamentally different for others. Even those for whom they are worlds apart don’t always agree on what activities constitute one or the other.

That’s just the specialists. Now politicians, media pundits, teachers, children, parents, and the ‘general public’ are all starting to talk about the technical aspects of digital technology in day to day discussions. Some of this more general audience have developed a sophisticated understanding of the terminology and the issues. Many are still developing this understanding, but are discussing them none the less, such is their importance in our society.

‘Digital making’ is one term that is used regularly in discussions about technology education. My impression was that it was a term particular to this field, but a review of the academic literature recently turned up themes in architecture, fine art, engineering, education and many others. Although the term is fairly descriptive, making something with digital technology, the focus of it’s use and the connotative meanings that people bring to it is often quite different in these different fields.

When I was working at Nesta we had many discussions about how we should use this term that was a cornerstone of our education work. Originally it was defined quite specifically. It was seen as:

An activity where someone makes or creates something using digital technology and in the process learns something about how the technology works.

Our focus was learning about technology and getting young people interested and achieving something in technical subjects. My colleagues had run grant funds with this focus as an explicit aim, so the specific second half of that definition was really important to us.

Then I undertook the ‘Young Digital Makers‘ research project, where I set out to find out about opportunities for young people in this area across the UK. Educators may be very focused on explicit learning, but young people aren’t always. To someone who is fairly new to everything, learning is so inextricable from everyday experience that it is often not an explicit focus. When adults think about learning they often think about the kind of institutionalised learning that separates out ‘learning objectives’, teaches them explicitly and then measures them at the end. Not so for young people, especially in the spaces outside of schools and colleges such as much of what we were looking at. They do things and they learn along the way.

I also brought to this my own experience. I became involved in digital making through music production. Much of my early introduction to the more technical aspects of digital technology came through getting machines to talk to each other to make electronic music. Yet music production, at least at first, would probably fall outside of the above definition1. As you delve deeper into it then you are more likely to start learning fundamental things about how digital technology works (and also the physics of sound and the aesthetics of music), which is exactly how I got interested in computer programming.

As I wrote in the Young Digital Makers report:

the pathways young people take are often nuanced, sometimes messy and always individual, just like the most authentic learning.

For that research we took on a wider definition of digital making that would include any act of making or creation as possible. This recognises that something that starts out entirely as a creative act can lead to learning about the technical, sometimes quickly but sometimes as part of a longer learning journey. Digital making projects can exist in any of the four quadrants of the diagram below. Indeed, someone may move through these quadrants as a project progresses.

Take my own ‘Retropicam‘ project, a box brownie camera that shoots gifs and posts them to twitter using a Raspberry Pi computer. The start of that project was relatively creative, I thought divergently about what I could do with the retro camera I had been given. I had to use a little knowledge to know what might be technically possible, but I didn’t actually know how to achieve it. My activity became less creative as I fitted the computer together and wedged it inside the box, but became both more creative and more technical as I figured out how to program the computer to take photos and combine them when I pressed the shutter button. Some projects may be more easily pigeonholed into one area of the diagram, but many will move through it as the activity develops.

What is important is not narrowly defining activities in such a way that some are seen to be insufficiently technical to ‘count’, but being aware of the possibilities an activity contains. Any activity making something with digital technology has the potential to lead to further learning and development. Some young people will discover this route on their own, but many will need some guidance to see how to take the next steps with their projects and develop opportunities for deeper learning. I’d argue that understanding these issues and the opportunities for development they hold and guiding young people to explore them further is one of the roles it is important for adults and teachers to play in this learning (as well as more experienced peers).

So, what is digital making then? People use the term to mean everything from picking up a digital camera to compose a shot, to getting deep into computer programming and electronics. It can mean all and any of these things. I think it’s important not to shut out certain activities, but to build an understanding of where they fit in with different types of learning and where the opportunities for development are.

Often we try to hone in and closely define terms, particularly when we are talking about subjects surrounding technical fields. However, there are actually great opportunities in ambiguity, and as Doug Belshaw and Steve Higgins write, there is such a thing as ‘productive ambiguity’, where we all know enough about what a term could mean in order for it to be useful.

Accepting a bit of ambiguity around digital making keeps open the many opportunities it holds to engage people and to start them off, or to help them continue, on a journey of learning through making.

There’s much more, of course, to explore in terms of learning through making, constructionism, the tensions of discovery learning and direct instruction of course, but that’s material for future posts.