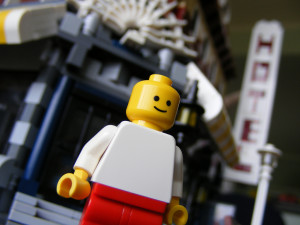 I’ve been thinking about the power of examples, the role models we have and how we can exercise more choice in seeing the possibilities open to us.

Earlier this month one of my oldest friends came to stay. He’s the head teacher of an international school, having moved abroad about four years ago, and was in the UK to interview potential new teachers for his school.

We talk fairly regularly, but there is something about the unstructured conversations you have when face to face, whilst travelling or eating dinner, for digging into those deeper topics of conversation. We talked about how life was going, the choices we’ve made, possible plans for the future.

When people go to teach abroad I think it’s often seen as a sojourn. It’s a finite experience they undertake before something else. Have that experience, do their time abroad, then get back to life. That’s how my friend used to talk about it. I think you often have to when making such a huge life change, if only to psychologically keep open the option to come back if it doesn’t work out, to correct it if it was a mistake.

The thing is, if it works out then it can often turn into something entirely different. Thankfully for my friend it has really worked out. Both him and his wife love their new home, they’ve had two children there, he’s done hugely well in his work, and they plan to stay for some time.

They don’t plan to come back to the UK after an allotted time is up. In fact, if they were to move on it would likely be to another country, another international school or some other work in international education.

We talked about next steps, and my friend spoke of the many possibilities there now are, possibilities I don’t think he’d have know about or thought possible before they left the UK. He talked of exciting things he’d seen colleagues do after moving on from his current school, then he said something that really made me think.

I could do it, I’ve seen it happen.

There is something so powerful about seeing others do things. Seeing people you know make brave choices or achieve great things and knowing that they are no more capable and no luckier than you opens your eyes to what’s possible.

Yet so often this happens only by chance. You happen to end up in a situation where people show you possibilities you hadn’t thought of, and give you this insight into what you might do.

Consider your career choices, how you’ve aspired to the kind of life you have, the relationships you’ve developed with people. So much of these are built on the examples we’ve had.

What if we aimed to exercise a bit more deliberate choice in these examples? Rather than following all the examples we haven’t, seeking out some alternatives to hold up and try on for size. Rather than going for our sojourn abroad, making a big choice for what it is, going there to find some alternative stories to tell about ourselves, to see what it might be next.

What we can do is often limited by the stories we can tell, themselves based on what we have seen. Try to see more and what we can do opens up. Then it’s not what you think you can do that decides what you do, it’s what you actually want to do.