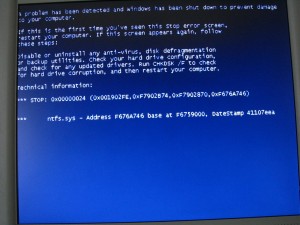 I’ve always been a pretty demanding computer user. I tend to push them to the limits, and to the point of failure sometimes. Having just got back into music production I’ve been pushing my computer much beyond how it usually gets used for writing. It’s made me think about the different ways machines fail and what we might take from that in how we behave.

The first computer I had for music used to fail in a really messy way. The audio interface connected right next to the keyboard and I was forever knocking out the cable. The above blue screen of death became a common sight, as the computer continued to feed data to the disconnected hardware. It desperately tried to achieve what it was being asked until the whole thing crashed.

My current computer uses the same hardware. It’s better designed so I don’t knock the cable out that often, but when I do it is a totally different story. The music stops for a moment, then it switches over to the built in speakers. This is of no use to me as they sound terrible, but at least it doesn’t cause a complete crash and a loss of work.

It is still annoying when it happens, but it doesn’t cause me to loose time and work. It has been set up to see a problem coming and stop before it descends into a low level crash. It doesn’t keep trying to do the exact thing that it was being asked until it collapses, but switches to something else which doesn’t achieve the goals but at least leaves it in a functional state and is as a result far less annoying to all concerned.

There is an analogy there for us all, I think. Fail elegantly.

Photo: CC BY Karl-Ludwig Poggemann (Credit also to Microsoft for creating such an iconic screen)