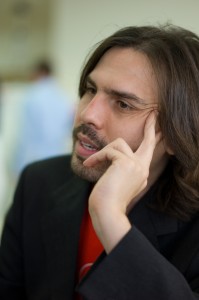 Yesterday lunchtime Nesta hosted a lunchtime talk by director of the Macro Connections department at MIT Media Lab César Hidalgo. He gave us a fascinating insight into his work on data and place, and the insights he has gained into the nature of cities and economic production.

His work in this area has led to many requests for him to produce reports for various countries and cities on their economic situations and their growth. Given his expertise in the area it wouldn’t be hard to imagine a busy consultancy growing out of this area alone. However, being someone who is clearly passionate about creating ideas rather than generating work, César shared with us his simple but insightful approach to this:

If something needs to be done more than once, put the time into making a tool to do it.

This led to the creation of Dataviva, a tool to produce the kinds of reports he was being asked for so that people can create them themselves. There is a lesson for people in any field here, and a key provocation for many of us in education, at what point would it be worth investing the time in making a tool to do something rather than ploughing on doing the same thing the same way over and over.

He took this idea further, citing Marshal McLuhan’s ‘the medium is the message’, and explored a view on the best way to influence people that I have never come across before. He argued that rather than trying to influence something by argument and persuasion, sometimes it is better to just make a tool to do it.

Rather than pushing a message, create a medium that encapsulates the approach you think it right, encourage people to use it, and the message you want to communicate comes across. In his case, rather than campaigning for more transparent and relevant use of data for influencing decisions on economics, he builds tools that allow people to access relevant data transparently. Dataviva has now been showcased on the UN website, pushing his message that such presentation of data is useful and important.

What tasks as an educator do you do repeatedly and laboriously? Rather than spending time toiling, would it be a better investment of time (or money) to make a system or tool to do them more efficiently?

What key messages are you regularly trying to push home with your students? Rather than telling them, would making a tool or system to do things in the way you intend be a more powerful influence?

More from Cesar Hidalgo’s fascinating work on data and place: