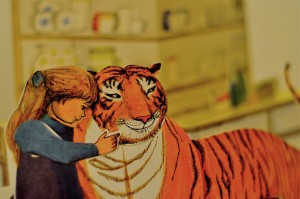 “Never, ever, write something that’s already in the picture. They can look at the picture and they knew that already and they’ve made all that effort […] it’s mad.”

In a fascinating conversation with Alan Yentob, renowned children’s author Judith Kerr told how she was inspired to start writing picture books for children when her son expressed his boredom with the books he was given to learn to read with. In these books the pictures simply depicted what was written in the text, which makes a certain amount of sense if they are intended to help children to learn to decode the text. However, the effect Judith saw was one of boredom, there was little incentive to learn to read when books are written like this. Reading is hard, why expend all that effort when you know what it’s going to say..?

Judith’s answer was to write books where the pictures and the words were interwoven, supporting each other and adding layers of meaning to her accessible yet subtly complex stories. The result is a cannon of children’s literature that has not just taught generations of children to read, but delighted them at the same time and become an important part of our cultural heritage.

Whether it is resources for reading, those for maths, or technology in our schools, there is something here for thinking about how we approach the tools we design for learning.

So often when designing ways for people to learn we concentrate on the logical, how best to break learning into specific bits and deliver those bits in as efficient and effective a way as possible. We shouldn’t forget about the art, the delight, as therein lies the culture, and culture is what remains in people long after they have forgotten the content they learned at school.

Whatever tools we are using, we should “never ever write something that’s already in the picture”, every medium has its own purpose to be mastered, and its own delights to be revealed.

There are many more insights from this fascinating author in the ‘Imagine’ programme, available on BBC iPlayer in the UK for the next couple of weeks. Worth watching, it’s thought provoking and delightful in equal measure.