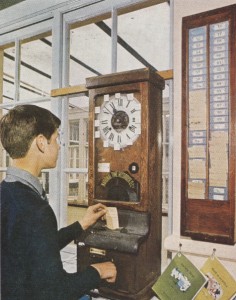 A friend of a friend just completed his PhD thesis; a task that often causes some of the most intense trepidation and procrastination I have come across. “He did really well”, my friend said, somewhat in awe, “he just treated it like a job and got it done”.

Another friend is also working on his thesis; an all consuming endeavour. With total freedom to manage his time on this huge project, several times he has felt like it is getting too much, stopped, and tried to re-focus. Whenever he does he generally makes a resolution to ‘treat it like a job’. This generally mean avoiding the procrastination pitfalls of working from home at odd hours, ignoring the temptation to make excuses that he is ‘waiting for inspiration’, and commit to going in to his office and sitting at his desk 9-5.

These days in many jobs it is possible to escape the trappings of the 9-5 clock-in, clock-out, culture. We have the technology to work and communicate from home, or any place we choose, often at any time we choose. With this amazing flexibility, and increasing numbers of people are choosing to fit work more around their family, their interests and their lives. However, what comes with this flexibility and constant communication is distraction, task overload and lack of focus. In the old world people would graft away at a task until the office closed, have a very good reason to take a healthy break, and get back to it when they could. When you could be working at any time the window for procrastination is so much greater, not to mention the compulsion to feel like you should be working all the time, especially if said procrastination caused you to have an unproductive spell earlier in the day.

For all the benefits of modern working, isn’t it interesting that when things need to get done we would choose to go back to the traditional ways of working and  ‘treat it like a job’? Perhaps there is more to the clocking in machine than we would like to think.