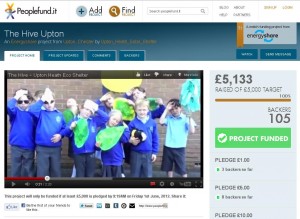 Plenty of schools face challenges around the appropriateness of their physical environment. Plenty of Parent Teacher Associations and Governing bodies seek to raise or allocate funds to do something about this. However, Upton Heath School in Chester, UK have approached such challenges a little differently; by getting the children involved in a crowd-funding project using Peoplefund.it.

According to Wikipedia, the phenomenon of crowd-funding arose from the music industry where music fans realised they could utilise internet technologies to co-ordinate a fund raising projects to support bands that may not have been deemed to have enough mass appeal for traditional record companies to support them. More recently sites like ‘Just Giving‘ have revolutionised the field of sponsorship based charity fundraising, and ‘Kickstarter‘ has allowed creative projects ranging from ‘e-paper watches‘, to an artistic installation in the dead sea to crowd source their initial funding.

Pupils at Upton Heath School had no shelter in their playground, and wanted to do something about it. Through discussions with the school community decided to pitch a project to create a shady space that could support their learning outdoors, whilst also providing electricity for the school through solar panels installed on its roof. This last point was a key, because it allowed them to access match funding from the ‘Energy share fund‘; supporters of renewable energy projects. Setting an ambitious target of raising £5,000 in just six weeks, the project was floated on crowd funding website ‘Peoplefund.it‘. The project was promoted on social media channels and with an entertaining YouTube video, and six weeks later they have surpassed their goal; raising over £10,000 (with match funding) for the project.

What struck me most about this great story was the agency of the children and the finesse with which it was executed. This is an example of pupils and schools really thinking outside of the box, designing a project for maximum benefit and maximum appeal to potential funders, and harnessing new social technologies in a creative way. These children are not being told their ideas are too big, they are being enabled to make them as big as possible and no doubt learning masses along the way about engaging with the world and making things happen.