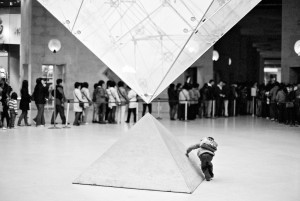 For any teacher trying to enable students to take control of their own whilst working within a prescribed curriculum there is a tension between the student led ‘desired’ learning and the ‘required learning. Balancing this tension is delicate, sometimes the difference between a piecemeal nod to learners interests, or a failure to achieve the standards needed.

With pressure from on high, unsurprisingly the required learning often comes first. Many teachers manage to prioritise the curriculum content, whilst allowing time at the end for learners to extend what they have covered in their own directions. There is the tension that starting with letting learners follow their interests may take the learning in different directions, directions that have to be curtailed to leave enough time to get through what needs to be done.

Last year I experimented with running a topic on Ancient Egypt with my class of 8 year olds by allowing them to direct the learning from the start. They engaged with a wide range of questions and inquiries following their own interests, much of which ended up fulfilling what was required by the curriculum, some of which didn’t. When it came towards the end of the time we had I surveyed the learning, and discovered there was a gap that they had not covered from the curriculum looking at the effect of the cyclical flooding of the river Nile on Egyptian society.

I decided to play it straight; I told them there was something they hadn’t done, I told them we had limited time and we must do it, and I told them that because I had given them so much time for their own enquiry the only way to cover it thoroughly was in a very traditional way, a way I confess I described as ‘a bit boring’. What surprised me was that they didn’t find it boring at all. Despite the fact the resources I had were not that exciting, and the lesson was not very interactive they were highly engaged by the topic, asking questions and debating the interpretations with each other with enthusiasm.

I realised that because they had been allowed to engage with the topic at their own level of interest for a significant amount of time they were enthusiastic to see where this ‘required’ learning that had not occurred to them before fitted in. They had made the subject their own, and now were keen to learn anything about it of relevance, even if it had not been a particular interest from the start.

Required curricula may not always be tailored to learner’s interests, but they are usually put together with some logical thought about what is relevant to the subject. Encourage the learners to become truly engaged with the subject and make it their own, and it can lead to an enthusiasm for the required learning. Allowing them to follow the ‘desired’ learning first can in some cases make this happen, and rather than take them away from their interests, the ‘required’ learning can then generate even more interests that hadn’t even occurred to them before…