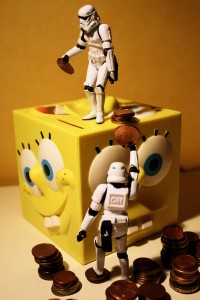 When you get a new gadget what do you do? A phone, a camera, a games console, the first instinct is to play, to explore without focus, to ‘loose some time’ with it.

It’s never a case of ‘loosing time’, the time you spend playing around with something new and experimenting shapes the way you use once you settle into the day to day. Think about that smart phone, or camera, or piece of software, how many of the workflows you follow when using it were shaped in that initial period of ‘playing’? I’d be willing to bet most of them were.

Playing with something is an investment of time, we do so readily when we have the artificial place marker of buying a new gadget to excuse the ‘indulgent’ use of time, but how often do we do so with existing practices and workflows? I was talking to a student recently looking to push their writing to the next level, and I suggested radically altering their planning processes to something more visual and more flexible. Initially they kicked back against this, feeling it wouldn’t work for them, but I’m not sure you can know until you have played with it a bit. I used to hate the idea of ‘brainstorming’, ‘mindmapping’ and other ways of visually representing thoughts, but when my usual methods failed me I played with alternatives. A colleague told me the other day the students talk about me in terms of post-its and brainstorms, the playing turned out to be an investment in methods that have worked.

It’s easy to see play as frivolous, as one of the pleasures of childhood cut off to us later in life. In reality I think it is an investment, time spent to explore and develop ways of doing things that later become standard practice. If your standard practice isn’t cutting it, why not invest some time in exploring alternatives. Don’t wait for a new gadget to play with new ways of working. Even if they don’t feel right on the face of it, having a play can sometimes result in things which change your game.

1 thought on “Play as investment”