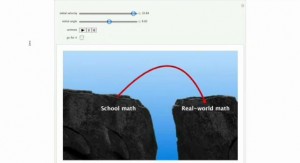 “if you walk across a chasm, you end up making it worse than if you didn’t start at all — bigger disaster. No, what I’m suggesting is that we should leap off, we should increase our velocity so that it’s so high, and we should leap off one side and go the other”

So said Conrad Wolfram in his TED talk last year about the potential to revolutionise Mathematics education using computers. The talk is full of fascinating insights into the potential directions that Mathematics education could take, but it was the chasm analogy that really struck me. Wolfram argues that what is needed in Mathematics is a giant leap, a revolution not an incremental change, and that to try to make such a change slowly and incrementally is doomed to failure, much as one would be if they tried to walk slowly across a chasm.

I think this analogy is pertinent for change in Education more generally, we become very stuck with tweaking existing ways of doing things when sometimes this may be the equivalent of walking off a cliff.

The trick is understanding when the chasm of change is big enough to require a leap. In those areas where we can see that it is, maybe we should start jumping.