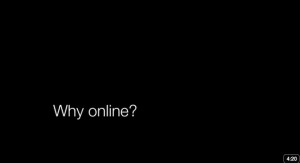 Later this week I am running sessions for my first year and PGCE primary education students on the power of getting connected online. Since arriving at Plymouth University I have been taking every opportunity to discuss this point, and we are starting to see an emerging culture of student teachers realising the benefits of sharing and discussing their ideas and practice openly using online tools.

I thought they might have had enough of me going on about the subject, so I invited some of the emergent student tweeters and bloggers to record some video soundbites for me so they could hear it from their peers.

I booked a room, tweeted where I was, and two students from Steve Wheeler‘s Education Studies group turned up, keen to talk about their blogging story so far, despite it being just over a week old.

They had started out framing the blogs as a competition for ‘hits’, yet it quickly became clear that in only a week they had become much more than that. Promising to write a new post for every thirty views, Natasha had quickly found her pieces getting longer and more detailed, and Jade pointed out that both of them had started out simply collecting research, but quickly moved to digging deeper with the material they were exploring, and becoming increasingly critical in their analysis of it.

I thought this was a great model for my first years, many of whom are getting to grips with such structures of academic writing for the first time. I asked them how the first years could make a start at this, as being third years they must have done this quite a few times before…

Apparently not, both asserted that they had never followed such rigorous research methods, never engaged so critically with a topic, and never put so much into a piece of University work of learnt so much from it.

Did their tutor explain this was how their blogs should work? Certainly not, the increasingly structured approach to research they were describing ‘just emerged’…

5 thoughts on “Why online? Undergraduate blogging.”