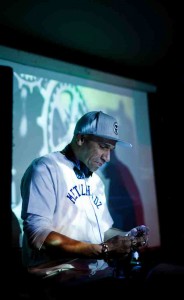 I dropped out of school, and I’d do it again.

As part of his talk on ‘Education Revolution’ at TEDx London this weekend, Goldie told the story of how he had dropped out of an education system, which he saw as totally irrelevant to his life. Instead, he learned from ‘street culture’, finding mentors who he saw achieving in the real world, and leading to great personal success at first in the world of graffiti art, and later as an instigator of the musical revolution that was drum ‘n’ bass.
What struck me most about Goldie’s talk was his assertion that given the same choice today he would still drop out of the school system.
As educationalists, the easy implication to draw from this is that we need to ‘revolutionise’ schools to make them relevant to people like him, that we need to address their failings to stop learners dropping out. The more difficult implication is that what was really powerful for Goldie was immersing himself in the reality of street culture in such a way that could never happen in an institution like a school.
We could try to tweak schools to try to ‘hook’ people like Goldie into the system, but his story shows that education is far broader than school, so broad in fact that it need not necessarily have anything to do with the current institutions. His story is one of mentors, not of systems.
Why do we want to keep people like him in school? Whose ‘best interests’ is it in? Are we taking for granted the fact that school must be a feature in everyone’s life?
If there is an ‘education revolution’ ahead, Goldie’s story invites us to question the assumption that it will have anything to do with schools.
Photo (cc) Tom Kershaw

1 thought on “I dropped out of school, and I’d do it again.”