We began this academic year with an INSET day, where the whole staff came to work together on plans for the year. Last academic year saw our new headteacher Richard Hunter arrive at Robin Hood, and he designed the morning to be a chance to reflect on where we are and where we are going, as individuals, teams, and a whole school.

Richard invited consultant Claire Quinlan to work with him in this exercise. As the name might suggest, I know Claire very well, and I have also known Richard for some years before he became our head, so when I heard what they were planning for the day I felt it could be really beneficial to suggest some new technologies to enhance what they had already planned.

The day began with presentations from Richard and Claire about possible directions for the new year. We then moved into a workshop sessions. Richard had formulated four key questions he wanted staff to consider, and they began by individually considering their answers to these using a tool everyone was totally confident with; pen and paper.

They then moved into groups, and I demonstrated to them how the whole staff could all enter text at the same time into a google document I had prepared with a table of the questions. I distributed a link to this document using a customised bit.ly link so that everyone could quickly get started. Each group shared their individual thoughts, and then recorded their group responses on the document using a netbook. Whilst this was happening the document was also displayed on a projected screen so that everyone could clearly see it.

I thought there may be some technical difficulties with this, as I know many staff have had limited experience with google docs. I had therefore opted myself out of the activity to deal with these, but this proved unnecessary as everyone jumped straight in and had no problems accessing or using the document. The buzz in the room as everyones cursors started moving and their writing began appearing on the main screen was fantastic, and everyone found it really interesting to see in real time what other groups were coming up with. 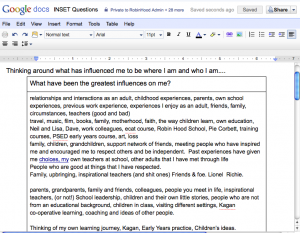 It did not stop there, as once Richard and Claire had given sufficient time for answering the first question, they stopped the group and I quickly copied and pasted the text from the responses into a word cloud. I had come up with this idea thinking it would be a good way to review the ‘themes’ of the responses, but was really not quite sure how it would turn out. Thankfully as I pressed ‘create’ and the wordle appeared on the large screen it was clear that it really chimed with what people had been thinking, and provided a great visual way to review our response as a whole school.

We repeated this process for each of Richard’s questions, and produced four interesting word clouds to depict where we feel we are as a staff, and what we need to develop to keep moving things forward. We then split into phase groups to discuss the issues raised, and to create our own word clouds as to what we felt the direction of our phase was. We had decided to provide pens and paper for this, as we didn’t want people feeling limited in their expression by tools they were not confident with. However, almost every group came and asked me for the address of the word cloud site, and completed the exercise using this.

I was really happy with how the realtime collaboration and quick review allowed by these tools contributed to the thinking that Richard wanted to happen in the session, and everyone seemed to enjoy the chance to collaborate on big ideas at the start of the year.

On another note, I was really pleased with how we integrated the I.C.T. tools into the session, as it provided an excellent model for teachers of how they could use such tools with their classes. I have already had several teachers come to ask me about their ideas for using google docs with their pupils, and this has obviously been a great start to a year of developing its use across our school.