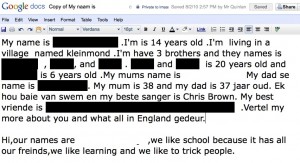 Some time ago several of my colleagues visited South Africa as part of a project on school twinning. As part of this project they had planned to work with pupils in South Africa on filming and editing video using flip cameras. Unfortunately the computers available to them were not capable of video editing, so they changed tack and decided to introduce them to Google Docs.I set up some logins on our Google Apps system, and they got started on the system.

After some familiarising, their pupils wrote some letters to my class. They could have just emailed them, but we thought it would be more interesting to use the collaborative features of docs for them to work together on something. Their letters were written in Afrikaans, and we began by giving my class some time to look at them and see if they could work out what they said. Several of them did very well at spotting familiar words and gaining some meaning, but a number of them were well ahead of me and very quickly ran the whole thing through Google translate! This could have been seen as ‘cheating’, but was really a logical next step, and I was very impressed at their diligence in then going through and correcting the less than perfect translation. This was also great learning for them as it gave some really valuable experience in checking work back for sense and correcting, something which we had done a lot of work on.  They then wrote back their own letters.

Before the following day the pupils from South Africa had looked back at their work and in some cases translated their letters to Afrikaans, and in others written back. The writing went back and forth in this way for a couple of days, with some lovely interactions between children of different ages from very different cultures.

All in all was a really successful project, and coupled with further work finding out about South Africa my class gained a lot in terms of global awareness and cultural understanding. It also triggered some really interesting discussions around the letters, the language of Afrikaans, and the usefulness of automatic translation services.