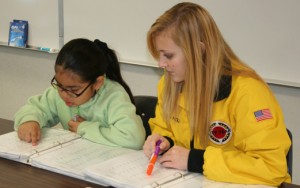 I’ve been working in the last few weeks with colleagues from many organisations exploring the idea of quality and best practice in one-to-one interventions for young people. I wrote the below for the Nesta blog on an idea that emerged from the project I found fascinating.

For some time Nesta has been supporting organisations that provide one-to-one interventions for young people through the Centre for Social Action Innovation Fund and our Digital Education programme. There is considerable evidence that one-to-one can make an impact on young people. It’s an area where evidence bears out what many people’s intuition would tell them; giving support one-to-one can make a real difference.

The difference, though, often depends on the detail. There are many shapes such programmes could take, but clearly we should try to understand how they can be set up to best effect. Some evidence that suggests that simply putting adults in front of young people results in more learning than would happen developmentally. Prof. John Hattie has written that this means any intervention can make a difference, presenting the challenge to teachers that if any adult makes a difference, surely an expert professional should make a significantly greater difference.

This said, anyone constructing one to one programmes will want to ensure their work is as successful as it can be. To that end, we have been working with the TeachFirst Innovation Unit and the Brightside Trust to bring together a range of organisations from across the field of coaching, mentoring and tutoring. We wanted to support these often small organisations in sharing the expertise and experience they are all developing.

Last week we began this process, to begin to explore what a quality framework for one-to-one interventions might look like. We’ve been deliberately broad in scope and included coaching, mentoring and tutoring. These disciplines can be quite different in their approaches and their aims. The discussions started by exploring this territory, mapping out what we all mean by them and whether those understandings are shared or contrasting.

What resulted was a rich and fascinating discussion. Understandably different organisations frame their activities slightly differently, but there was consensus on the general shapes the different activities take.

Coaching was framed as a discipline prevalent in the business world and closely defined by models such as the ‘Grow’ approach. Many understood coaching to be characterised by the skillful questioning and presentation of challenges. The ‘coach’ may not (indeed some argue that they should not) be a subject expert but is someone who can help the other to develop themselves. The end goal of that development and the shape it takes is defined by the coachee, with the coach there to support them to develop this awareness and responsibility.

Mentoring was framed slightly differently. Many in the group saw it as sharing elements of coaching particularly that the goals may be more likely to be set by the mentee rather than the mentor. The key difference we discussed was whether a mentor is more of a role model; someone with particular achievements, experience or qualities that would provide a specific example or role model for the mentee. There is an element of identity building in this framing of mentoring, where the mentee is meant to identify with the mentor and take on some aspect of their experience or capacities.

Tutoring was framed in the discussion as different again. A tutor is someone the group saw as having particular expertise and knowledge, with a role of explicitly communicating this to their tutee. Tutoring for young people was characterised as being more about academic studies, and as such having a well defined body of knowledge or a curriculum. Outcomes for this activity, as well as how it proceeds is perhaps less down to the receiver, as they take part in the intervention to improve in closely defined areas compared to coaching or mentoring.

In reality, many of the organisations providing interventions to young people adopt a range of approaches, as do those individuals working one to one with their participants.

While we did find a broad agreement across our group about the characteristics of these activities, it was suggested that it may be more useful to think of them as a continuum. Such a model would at one end have the exploratory, open ended activity of coaching, would become more structured moving into mentoring, and incorporate a more formal, curriculum driven model as it reached tutoring. There was a suggestion that the far end of the scale might be ‘instruction’, a very explicit form of one to one support to complete a specific task.

Few, if any, of the organisations in our group aimed to incorporate instruction. It was recognised that those they work with may vary their approach. Sometimes they may work in an open ended way with young people driving the goals and direction. At others they may take a more explicit approach, drawing on their experiences to influence them as mentees. When needed, they will identify a particular knowledge base that they need to develop to reach their goals.

Coaching, mentoring and tutoring do seem to be quite different activities. They have enough similarities to make these distinctions fuzzy in the real world. While it was uncomfortable to put them in rigid boxes, a continuum could provide a useful model for thinking about how one to one programmes are designed and how those taking part in them are trained.

Over the next few weeks our exploration of one- to- one interventions continues. We will be discussing how organisations can most effectively design, deliver and evaluate such programmes. It’s not just discussion though, this will all come together to form a ‘quality framework’. This will be a document designed to share the experience built up by the organisations we’ve been working with and support others as they develop one- to- one support for even more young people.