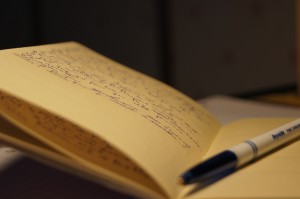 Presumably everybody has some overarching problem, some itch or something that they want the world to be the same or different, or [are] trying to contribute to the world in a certain way. Sometimes that’s telling the story backwards, but I wonder if there are enough people trying to tell the story forwards who know where they are trying to get to.

Doug made this remark as an aside in the last ‘Today in Digital Education‘ podcast when talking about the idea of creating an ‘about.me’ type elevator pitch video to bring people up to speed with who you are and what you are working on. It was an aside, but it has stuck with me this week.

I’m a historian by training, I’m good at telling the story backwards. In fact, anyone who knows me personally knows that I love stories, and am often retelling and reinterpreting them. I’m the same for my career. I’ve had a fairly varied almost decade since I left university, working in radio, music, IT, school teaching, higher education and now the world of third sector think tanks.

Telling it backwards it makes sense. Underpinned by a love for learning, I’ve taken various opportunities to learn new things, continue to figure out the world of learning, and make some kind of difference to others along the way.

I never told it forwards though. If you had asked me at the start of any particular stage I would not have been able to tell you where I would be for the following stage, let alone the one after that. I’ve always felt an importance in having momentum in my life and feeling like I am going somewhere.

Doug’s aside came from an idea from Vinay Gupta’s blog, and it struck me that Vinay is an example of someone who really does try to tell his story forwards. Inventor of the Hexayurt refugee shelter, and now inventing the future of distributed communications technology for running the next stage of our society, there are many examples online of Vinay sticking his neck out by defining how he wants the future to be and working to make it so.

And there’s the thing. We can all tell our stories backwards. It’s a skill for sure, it requires some intellectual reflection, but no real risks. After all, what’s in the past is done, and how we present and represent it can be shifted and changed to better help our understanding or suite our current purposes.

Telling your story forward requires you to stick your neck out, increasingly so the more publicly you do so. 

What are you hoping to change? What threatened thing are you going to keep the same? What exactly is it you want to contribute to the world?

If you tell me now, it rather commits you to actually doing it. It makes you risk that you might now, that you might say so and then fail. It’s a much more difficult thing than taking the opportunities that come your way and then telling the story of how it all meant something afterwards. If you tell it forwards it commits you to doing the difficult stuff, to saying “no” to some worthwhile opportunities that don’t suit your focus, but keeping at that thing you have deliberately decided is your purpose.

The difficulty is deciding exactly what that thing is, although I think many of us have an inkling inside. As I get older and paradoxically have more to tell backwards, I’m increasingly thinking about how I should tell my story forwards.

2 thoughts on “Telling it forwards”