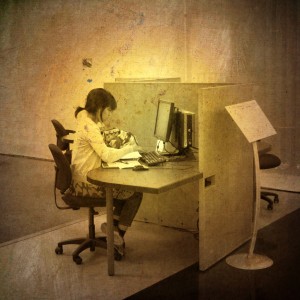 The House of Lords have assembled a select committee on digital skills, and recently Nesta’s Jessica Bland and I were invited to go to give evidence. In the process of preparing my contribution I came to consider the clarity of explanation around the use of technology in schools, and came across a distinction I think it useful in continuing to move forward the discussion and ultimately the practice in this area.

Since I first became involved in the schools sector the use of technology has been referred to as ‘ICT’. At first this was a discrete subject that young people were taught in dedicated lessons, often in dedicated suites or labs of computers.

As technology came to be more ubiquitous it quickly came to be conceptualised as something that could be useful in other subjects, so you had the English lessons where the class trooped down to the ICT suite to work on their composition using digital editing tools in word processors.

At the same time dedicated teaching tools such as the ‘interactive whiteboard’ were being developed, and teachers were being encouraged to make use of digital technology in their lessons. The standards by which student teachers were judged included elements on use of ‘ICT’, and the standard lesson planning forms provided by Universities and some schools came to include boxes to complete on ‘use of ICT’.

Use of technology as a teaching tool and the skills young people develop in using technology to create a piece of work are quite different things. The skills needed to effectively research and present information are very different to those needed to actually write a computer program. Yet, all of these are often referred to as ‘ICT’. As the use of technology in education continues to develop, we need some clearer language to facilitate clear thinking about the direction it takes.

Computing: Technology as a subject

Much has been written about the importance of young people learning about technology in itself. There is a feeling that the complexity of modern technology, masked by the ease of use of its basic functions, could lead to a generation becoming consumers of technology with little understanding of how to manipulate it and create. We have a new curriculum subject in England of ‘Computing’ which covers the various aspects of this, from using technology to research and present information, through programming and computer science, to understanding issues of online safety and digital citizenship.

The Subjects: Technology within existing disciplines

The development of digital technology has had a significant impact on many subject disciplines. This often begins in a way that augments what is already accepted, but becomes increasingly pervasive until it could be argued it fundamentally alters the discipline. For example, the use of computers to collate, analyse and visually present data in Science was at first a more efficient (although in the early days not always!) way of achieving what people had for some time done manually. These days to be a modern scientist in most fields involves a sophisticated understanding of how large datasets can be manipulated and analysed using computation. There is still a need for young people to learn and understand the traditional aspects of subjects, but disciplines are changing as a result of developments in technology and school subjects need to develop to take account of that. Conrad Wolfram provocatively takes this a set further in terms of Maths, arguing that we should move on from ‘hand calculating’.

Technology Enhanced Learning: Technology as a tool for teaching & learning

Historically this has sometimes been conceptually muddled with the first area by describing it as ‘ICT’. There are uses of technology that can be beneficial for learning that do not involve learning about technology itself, and are not necessarily relevant to the subject disciplines themselves. To give a simple example, sophisticated visual presentations such as interactive models of the human body can represent subject content in a way that aids understanding. This is not specifically linked to the practice of the subject, and one does not need to understand how it works to benefit from it. There are many areas of promise in which technology is a tool for effective learning, rather than relating to the subject being learned or the technology itself.

There are clearly sub sets of categories for the use of technology within these three. For instance the ‘IT, Computer Science & Digital Literacy’ categories that were debated early in the development of the Computing curriculum, or the categories from our own ‘Decoding Learning’ report for ways technology could be used as a tool for learning.

Clear thinking requires clear language, and I would like to suggest that as our use of technology in schools develops we need to continue to clarify the way we categorise and discuss technology and move on from imprecise umbrella terms such as ‘ICT’. Clear and precise discussion can lead to clear and precise action. Such action will result in digital technology being used for the most benefit for young people.

Are these areas sufficient? Am I missing something? Clarity comes from testing ideas and debate so please do offer thoughts and suggestions in the comments below.