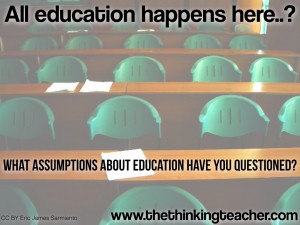 If we want thinking children, we need thinking teachers. This is the premise of my book ‘The Thinking Teacher’, in this series of posts I am sharing some of the key ideas from the book and the thinking behind them.

In this post I explore the premise of the book, and where it came from…

The Thinking Teacher started life as a lecture I was asked to do when working at Plymouth University. In the final year of the BEd Primary Education course, students take a module called ‘Vision & Values’ in which they explore a variety of philosophies of education with the intention of continuing to build their own before graduating as qualified teachers. Each week a different guest speaker or member of staff delivers a lecture on their philosophy of education and I was asked to put together one of these.

A lecture on ’the purpose of education’ is one of those tasks that at first seems a wonderful opportunity, but on examination turns into  very difficult task indeed. When I first started teaching, and first started this blog, I was very sure about the vision and values that underpinned what I did as an educator. As my experience has grown this has paradoxically become less the case, as I have been exposed to many competing perspectives that have made me question and nuance some views, and revise and reject others.

Rather than moving further towards certainty I have moved further from it, and yet this is something I value hugely. The opportunity to delve deeper, to be exposed to ideas and perspectives that make me question and refine my own are all things I have gained from. The result may be further uncertainty but to my mind that is better than a certainty based, as certainty I once had in this area surely was, on some degree of ignorance.

When faced with uncertainty as to how to approach a talk or a class, the question I usually come back to is ‘What can I do here that would be of most value?’.

So I decided not to stand on a soap box and tell the students what I thought education should be, but to explore with them this process that I have been going through. Largely this has come from exploring assumptions I hold about education and learning, and coming across arguments, ideas or examples that cause me to question those assumptions.

Of course this isn’t a neutral position. The very intention to encourage them to question their assumptions is a case of me trying to inflict a certain approach to learning onto them; a paradox of so called ‘progressive’ approaches to learning which I explore further in the book. That said, I felt it was a more legitimate position than me telling them what to think.

The result made me realise that for some time I had been seeking out such assumptions, exploring examples from fields normally seen to be well removed from schools, and reading more deeply into the background of readily accepted truisms of education.

So I decided to draw all this work together, into what became ‘The Thinking Teacher’, a book that is intended to document some of the questioning of assumptions I have done, in a hope that it encourages others to do the same with their own assumptions.

As Postman and Weingartner asserted in ‘Teaching as a subversive activity’, which is explored in detail at the start of the book, questioning assumptions is not just about destroying them, but for those that stand up to questioning demonstrating their validity. They suggest that such questioning is of primary importance to educators that they might encourage such an approach in those they work with.

In ‘The Thinking Teacher’ I argue that actively questioning assumptions about the world is one of the key activities that teachers should undertake. The thinking through of how aspects of education and learning work, and just as importantly how the wider world works, results in teachers who are well placed to encourage young people to do the same.

In the subsequent posts I will explore some of the key ideas and examples I use in the book.

More in ‘The Thinking Teacher’, which is available now in from Bookshop.org (independent book sellers,) Amazon UK, Amazon US and on the iBooks store.

More posts on ideas from ‘The Thinking Teacher here.