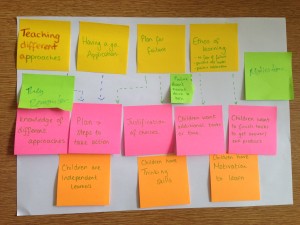 Several years ago I was made to think differently by a blog post by Ewan McIntosh on designing learning through structures rather than instructions. Ever since, I have been fascinated by how we can communicate through structures, models and tools for thinking.

As I wrote in my book, ‘The Thinking Teacher’, it’s helping people to develop their thinking for a wide variety of situations that is one of the most important purposes of education and structures and models are a great way to make this tangible and workable in practice.

Since joining Nesta, I’ve been struck by the ‘Theory of change’ model which we use here to plan and develop our programmes. It resonates with me from my training as a teacher and my own work training new teachers. One of the initial challenges that many new teachers face when going into the classroom is concentrating on activity rather than learning outcomes. It’s understandable that this happens, put most people in front of a class of 30 children or teenagers and their primary concern is going to be what they do to keep them occupied.

Unfortunately this preoccupation with activity sidetracks many new teachers into assessing the success of their work based on whether the young people where engaged by something rather than whether they were learning anything.

Start with what you want them to learn, design an experience that will cause them to learn it, build in some checks that this is happening along the way and has happened by the end. This is one of the core lessons of teacher education, and something all effective teachers master, whilst they may decide to tweak it and experiment later. One of the biggest points of discussion when new teachers are being assessed is whether their actions fitted in to this structure, and whether the assumptions they used to decide a certain experience or activity would cause certain learning to take place was sound, mistaken, or just didn’t happen for some reason.

What often strikes me though is that this central structure can often get lost the further you move up the education system.

For example, I see tweets on a fairly regular basis from educators describing how their school has just bought a set of tablet computers, and only now they are looking for how they can be used for learning outcomes.

Initiatives and system wide implementations need different structures and models, but it strikes me that the central premise is still the same; decide what you want to achieve, then plan what you need to do to make it happen, building in checks and measures along the way and at the end to find out whether it has.

I’ve found ‘Theory of Change’ to be a useful model for this. It’s described in detail in this document from our Centre for Social Action Innovation Fund, and broken down into a tool on the DIY toolkit. Essentially it is a structure for defining your large scale end goals, the measurable outcomes that will lead to those goals being achieved, and the activities that need to take place to make the outcomes happen. It also involves examining the assumptions you hold that one element of the plan will cause another, and often this can lead to developing and nuancing things significantly to ensure that this happens and things don’t ‘slip through the cracks’.

To my mind, it’s the ‘teaching 101’ structure, but developed into a process that is fit for initiatives, and more system level goals.

I tried this out at a conference last month at Plymouth University, and as a structure it worked well. The teachers I worked with wanted to explore how they could develop the primary children they work with to be independent learners. As Daisy Christodoulou writes in ‘Seven Myths About Education’, this laudable aim sometimes results in teachers dropping children in at the deep end, expecting them to be independent simply by withdrawing support.

The process we went through had some interesting outcomes. To begin with we realised we kept coming back to talking about independence in a particular context. It wasn’t possible to discuss it without referring to a particular subject because it means something different in different subjects. This made our thinking clearer as we focused on Maths in order to get more specific and not fall into the trap of talking in platitudes.

The structure forces you to break your large goals down into intermediate and observable outcomes, and this caused us to really pick apart what we meant by them and make them much more specific. The result was that we avoided the problem of dropping in at the deep end, realising the difference between simply expecting children to learn independently and actually teaching them to do so.

Examining these assumptions lead to much more actionable steps, specific interventions and plans that the teachers would follow through to achieve the end goal. It also caused us to define how we would know when the children they were working with had achieved the end goal, avoiding another education trap of turning an initiative into a never ending push that never quite achieves its end but continues to add to the workload for ever more.

Due to the time constraints of a conference workshop, completing a fully worked through plan was too ambitious and our plan remained unfinished. However, using this structure to think about initiatives in schools did cause some really deep thinking, leading to some actionable steps to achieve a goal that is often left to be somewhat nebulous.

Too often ‘innovation’ can mean an unfocused exploration of what is new and exciting, or feels like ‘the future’ without any real plan for where that might go. Although uncertainty and brergence comes with the territory, using structures such as ‘Theory of Change’ can create some focus in areas that would otherwise be chaotic and highly risky.

For the area of innovation in education systems this structure both resonates with one of the core approaches of teaching, and provides a way of scaling up that thinking to initiatives, projects and system change.

For more on structures for thinking about innovation see Nesta’s ‘DIY Toolkit’, and Ewan McIntosh’s piece on how it applies to education.

2 thoughts on “Theory of Change in Education”