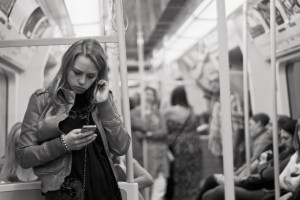 Doing the rounds this week on Facebook, Twitter and all our social avenues… another ‘viral video’ asking us to stop and think about what exactly we are doing to our social selves with all our purportedly social technology.

It makes some thought provoking points, and anything that makes you stop and think about something you do as a matter of daily habit is, in my book, a worthwhile thing. However, the irony of distributing this message as a YouTube video hasn’t been lost on many… It goes deeper that that though, the ‘YouTubeyness’ of this video is more than where you watch it; it has been very carefully stylistically constructed from writing to filming to editing to distribution to be a ‘viral video’. I notice as well the publishers have enabled the most intrusive 30 second monetized adverts available on YouTube…

You could dub this to a stretched old VHS tape, play it back on a CRT TV and it would still be a ‘YouTube video’. The irony isn’t just about the means of delivery, it’s baked in to the very essence of this cultural artefact. And maybe that isn’t an irony at all… maybe the use of these very conventions only strengthens the message as to just how much impact these technologies have had on our culture when they are creating hegemonic styles that even those opposed to end up using to communicate their protestations.

The medium is the message?

One YouTuber, however, has called its bluff and delivered a counter video on the benefits and opportunities of the technologies in question, as well as the personal responsibility we all bear for any degradation of our collective social experience. This piece discussing the joys of connection is stylistically much lower tech. A single take straight to camera in what looks like the performer’s living room. A knowing and personal script which is apparently memorised and performed with passion. A wide angle lens that lets us see the protagonist’s proximity to the green leaves of the outside world. The picture quality might be fuzzier and the edits less slick, but don’t think that wasn’t as carefully constructed as the first video…

It’s just a ‘rough’ response video, but the very roughness of its presentation and personal nature of its delivery subverts the style of the video it contests. It thereby paints the original as flawed in its presentation of a plea for less engagement with technology using such polished production. Make no mistake though, this response has also been constructed with the intention of becoming a ‘viral hit’, bouncing off the popularity of the video it responds to.

What is important to me about this debate is that it is just that; a debate. There are pros and cons to the habits technology can make us slip into. There are things it can make us do without thinking that we should question, but also opportunities and benefits that we should not take for granted.

That’s the hegemonic idea that I think is most important here; that the internet can enable freedom of ideas, and freedom to question and debate.

Rather than looking up, or looking down, what is most important is that we can look around, that we can take one presentation of our reality and come up with the counters, recognise that all that we do is a choice. Modern media is constructed in such a way that those of us who are connected can uncover alternative views in order to contrast and construct our own with unprecedented ease. Yet it is often stylistically and technologically constructed as to make the seeking of genuinely alternative messages a conscious challenge.

We have the physical technology that everyone should be able to make up their own minds (for now…), but we still need the technologies of ideas that help us to see the world in such a way that we take advantage of them. It’s too easy to click a link, be enamoured and uncritically click share ourselves, never to return or deeply reflect on what is was that something really meant to us or what it could have been. That’s less to do with the structures of hardware and software, and far more to do with how you structure your thinking and where you decide to look.