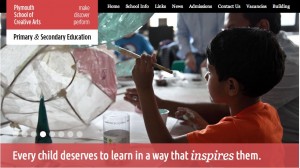 Today I spent my first morning working with Plymouth School of Creative Arts, a free school just about to open in Plymouth with an ethos of learning by making and enabling young people to nurture the creativity and inquisitive approach they all have in their early years throughout their schooling.

There is a story in the making here. The cast; a stellar set of staff with backgrounds as professional musicians and artists, teachers who have worked with research scientists, teaching assistants with backgrounds as unusual as the highest levels of chefing. The stage isn’t even built yet; a patch of wasteland near Plymouth ferry port, soon to be transformed into a school built from the ground up, right in front of the first year’s intake of pupils in their temporary classrooms.

The details are evolving, but the moral of the story is already there; a sense that education is about enabling people to reach the goal of self expression, sometimes through freedom and creativity, sometimes through instruction to build their knowledge and skills that they might make a dent in the world.

As part of the staff introduction, school sponsor Andrew Brewerton related a story from the early days of the proposal of the school. At that time they were talking up the ‘new-ness’ of the concept of a school based around creative arts feeding into, and fed by, an independent art college. My colleague Pete Yeomans was at that meeting, as an interested educationalist, as a local resident, but more importantly as a Dad. As he is known to do, he took issue with this…

For those of us drawn to such projects, who try to make their daily work the pursuit of what is new in education and in learning it is easy to be wowed by what is new, by what seems to be shiny, exciting or intellectually challenging.

3 thoughts on “Not new, but right”