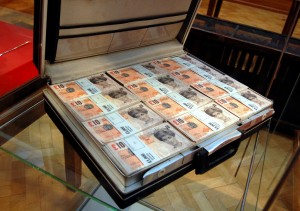 The KLF were one of the seminal artists of the 1990s, and in 1991 were the biggest selling band in the world for singles, yet now much of their work remains largely forgotten due to a decision they took to end their music careers and delete all of their records. The pop/dance crossover of their music undoubtedly influenced many, but perhaps their most thought provoking, certainly their single most expensive project was given little notice at the time or since.

Having left the world of music at their peak, the pair moved to the world of conceptual art, and decided to underline their dramatic exit from the industry by withdrawing the one million pound remaining profit from their music career in cash, transport it to a remote, abandoned scottish farm house and burn it, later releasing a home made video of the process.

I’ve always been fascinated by this story, particularly the aftermath where the pair seemed to not quite know what they were aiming for or whether it had been a success. I once told the story to a class of nine year olds and they immediately asked the questions and voiced the same challenges of those who did take any notice at the time.

Tell people this story, even children, and it is met with questions as to why they did it with undertones of a deep sense of how wrong it was. The children universally thought it was the wrong thing to do, that it was a waste, and the more thoughtful of them suggested they could have given it to charity or used it to buy food and clothes for the poor.

I put to them the argument that the two raised at the time; just because that money was burned does not mean there is any less food in the world that could be given to the poor, that any less will be thrown away when it reaches its sell by date. This lead to a fascinating discussion, they all continued to believe that it was totally wrong, but explored the depths of their thinking on these ideas in a way most of them had not before.

Watching the documentary about the whole thing, you get a sense that there was no real plan, just a feeling that this was an interesting thing to do, something that would challenge and provoke thinking, but with no specific thinking in mind. They seem quite aware of the enormity of it all, not least for their own financial stability, yet they don’t really have in mind what they want to achieve. In a world driven by objectives, plans and strategy born partly out of our relationship with money, this opens a whole book of questions.

They spent a million pounds to make us ask deep questions about what we value. Art is often expensive, and if it had caused a significant debate then it might have been seen to be worth it, yet you get the feeling reading and watching back that it failed. To me, this only compounds the impact of this act. If art is meant to make us think then they have certainly done that.

These are the kinds of situations I think we should share with young people, ones which have no answer, or even a clear question, but which challenge and explore some of the deep assumptions that we hold.

1 thought on “Lessons from the K Foundation”