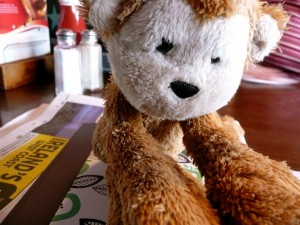 I was on a train to Brighton a couple of weeks ago when an enormous, drawn out shout started coming from down the train in front of me. Slowly over the top of the seat emerged a pair of hands, then some arms, then a head, and finally the whole body of a boy of about six came toppling over and crashed onto the seat in front of me.

He shook himself off, and then poked his head through the gap between the two seats in front of me.

“Hello”, he said, grinning, “my monkey is strangling me.”. He then introduced me to the monkey (a toy) and we had an enjoyable chat for the next ten minutes or so about monkeys, what the motives of that particular monkey were, the trip he was going on and life in general.

The boys mother was a few seats down from me, keeping half an eye on him but completely comfortable with him striking up conversation with a total stranger and not looking like she had any intention of stepping in or making any comment on the situation. It struck me how unusual this was, and then how sad it is that such events are so unusual in the world I live in.

Even sadder was that the man sat next to me, who was probably in his early 20s, obviously found it really difficult and uncomfortable to join in with this conversation. Given my background I was happy to chat away with this boy, and I think in some senses I felt I had a fall back if someone questioned my motives, as if saying I was a teacher would make acceptable something that would otherwise not be seen as such.

My neighbouring traveller tried to join in, but seemed visibly unsettled by the ambiguity as to whether it was socially acceptable to engage with the conversation this child started. Had I not been there joining in I think he would have felt compelled to largely ignore him or to brush off his attempts to start a conversation.

The train arrived, the boy joined his mum to get their luggage together, and we got off. As I walked down the platform the boy shouted goodbye to me, I turned and waved, his mother smiled at me, and I was struck by the fact that I was walking away from a moment that should have been totally natural, yet was sadly remarkably unusual.

2 thoughts on “Meeting a monkey”