With the increasing use of mobile devices in schools, we have been exploring their use with our student teachers. For me, the jury is out on whether the deployment of such devices is the way we should be moving in schools, although as with most things what will make the difference to children’s learning less about which device is use and more about how and why they are used. However, our students need to know how to get the best of the technology they encounter and to use it in a critical way, so this week they have been evaluating the use of both iPads and traditional desktop computers for animation.

An iPad with its integrated camera and the inanimate app provides a straightforward way in to animation. Unfortunately though, by their very nature the iPads move around, which is often the last thing you want to happen to the camera you animate with. When using webcams for animation with children I have often found it useful to tape the camera to the desk to prevent movement; something not possible with a handheld device.

My colleague came up with the ingenious idea of using cheap plastic document holders as stands for the iPads. In several sessions now I have given this setup to groups of primary school children and student teachers and they universally do the same thing. They put the iPad on the stand like a document and are then thrown by the fact the camera is obscured by the plastic stand. 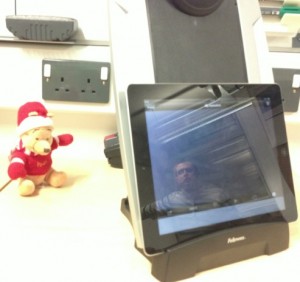 What really interests me is what happens next. Almost universally, their thinking first turns to how they can fix this within the iPad itself. They fiddle with the software until they find the control to switch to using the front facing camera. One group even tried to contort themselves so they could press the shutter button on the screen to take a photograph without the front facing camera catching their fingers. 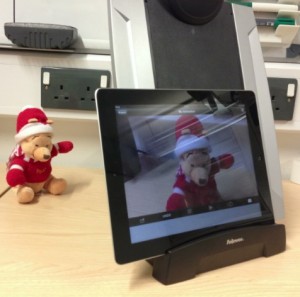 What I find fascinating about this is that almost universally people are approaching this problem by thinking in terms of software, not in terms of the physical interactions the software and the device is having with the ‘real’ world. When using a desktop computer you generally tweak the software or hardware; you don’t pick it up and move it. It doesn’t interact with the world in that way, it provides a contained environment in which you operate rather than being a part of the physical environment in which it is situated. These are mobile devices, but they are not thinking in a mobile paradigm to solve the problem, but in a very ‘desktop’ one

Nor am I, perhaps. Is it inherent in the task of using a mobile device for an animation project to frame the use of such devices in a ‘non-mobile’ way?

This got me thinking, with the increasing use of mobile devices in schools, are we actually designing learning in terms of the capabilities of mobile? Are we encouraging our students to think in terms of mobile use of technology, or do we often just replicate what we would do with other technology, and hence limit our students’ thinking to traditional technology paradigms such as the static desktop machine?

In hindsight it is easy to find the story of this thought process amusing, as did the very students who experience it this afternoon. However, it has happened in front of my eyes so many times as to make me realise that whilst I am aware that mobile is qualitatively different to more established technologies, I am not encouraging my students to think in such a different way. At least not yet…