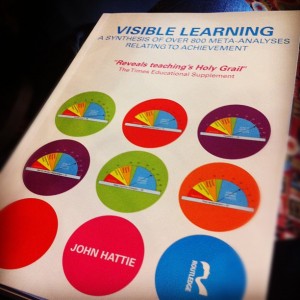 In ‘Visible Learning‘ John Hattie synthesised over 50,000 pieces of educational research in an attempt to find out which innovations in education really work. He looked at everything from family backgrounds, to the school children attend, to individual teaching strategies. His overall finding; almost every educational innovation makes a difference to achievement. Great news… or is it?

He argues that it is not great news at all, and that it exposes a fundamental problem with the way we approach teaching and learning. When we measure the effectiveness of innovations in the classroom we generally compare them to a baseline of zero. Do the learners make progress in their achievement when this innovation is introduced? If they do then it appears the innovation has been a success.

However, what Hattie argues we should be doing is not looking at whether innovations have an effect, but looking at whether they have a better than average effect. He looked at 800 meta analyses of effects on achievement, put them on a scale and found that the average effect is an effect size of 0.4. Therefore, he argues, we should be looking at embedding innovations which have an effect size of 0.4 or greater.

In practice, some innovations with a smaller effect size may well be worth it, particularly if they are very cost or time efficient to implement, but the big commitments need to have a better than average effect, not just an effect that is better than nothing. Even children left with no educational input and simply to develop without intervention show a better than nothing effect in achievement. In fact there is research, such as that of Sugata Mitra, which suggests leaving children to get on with it themselves may be the way to go… (Mitra, 2001, 2007).

There is, of course, much that could be debated about the methods of Hattie’s research, the problems inherent in meta-analyses, and the validity of the individual findings and subsequent ranking of innovations he undertook. However, as a general argument I think he makes a very valid point, one which I will be keeping in the forefront of my mind when trying something new in the classroom and evaluating the effect.

More from Hattie in his book, and on YouTube.

6 thoughts on “Better than nothing, or better than average?”