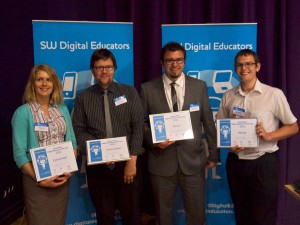 Yesterday saw educators from across the South West of England arrive in Plymouth for a new conference conceived by myself and colleagues from Plymouth University, The South West Grid for Learning, and the Open University Vital project. The theme was ‘a child’s place in a digital world’, and featured a mix of keynote presentations and award nominated teachers from the south west sharing their ideas and practice.

It was a day of double acts, and Juliette and Stephen Heppell opened the conference with their first keynote together. The spoke of the project at Juliette’s school where her students re designed their learning space, taking a research led approach and finding ideas from other students across the world. It was interesting to see how the project had progressed, as Stephen and Juliette blurred the boundaries between themselves as researcher and teacher, just as they encouraged their students to do with the learner/teacher roles.

This was followed up by more blurring of boundaries, this time those between digital and analogue, from Pie Corbett and David Mitchell. They crowd sourced a writing stimulus on the internet, engaged the audience in a skilful shared writing session, before blogging the results to tap into a global audience. They also left the audience with something to take away; a blogged version of the shared writing for students in their classes to finish.

After lunch, the award nominated teachers took over, delivering workshops from school radio to twitter with young children, animation to games creation. As I was organising the event I dipped in and out of many of the workshops, and it was great to see so much great practice being shared. There was a real focus on ‘take aways’, ways in which the delegates could implement similar projects in their classrooms, and no doubt lots of children are going to benefit from this sharing of practice. 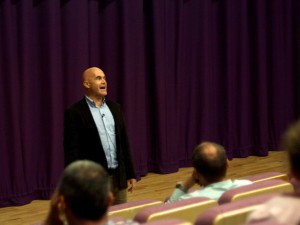 The day drew to a close with a quick fire keynote from the always inspiring Tim Rylands & Sarah Neild. Tim shared a huge array of creative ideas for using technology, in his inimitable engaging style, whilst Sarah blogged the results for delegates to take away and use with their learners.

Finally Tim presented the awards, as voted for by the delegates, for the top Digital Educators in the South West:

Anna’s use of blogging in her secondary classroom caught the attention of delegates for the way it empowered her students in their learning.

Phillip was awarded runner up for his integrated use of new technologies to support mission based Geography teaching in and outdoors.

Gary demonstrated an embedded use of ICT and new technologies across his school, and delegates were inspired by the way he used a whole school approach and harnessed the interests of the children to sustainably move on practice across the entire school.

The delegates were again inspired by the use of technology in a co-ordinated way across a whole school, this time in the form of twitter. The twitter accounts from North Town Primary School are used to reflect on learning and share its impact with the local community and the world.

It seems delegates were most taken by the nominees who demonstrated whole school approaches. Whilst chairing one of Gary Spracklen’s workshops I tweeted the following, which was retweeted many times:

This fed in to Tim Ryland’s final message of the conference; gather ideas, plan, but take time to stand still and think. He urged delegates to reflect deeply on the myriad ideas they had seen during the day, and to take one thing which makes sense for their learners and do it well. ‘EdTech’ can sometimes seem to be about constantly innovating with the next new thing, but the strong message from SW Digital Educators 2012 was using technology thoughtfully and sustainably to make a lasting difference to children across a school.

The next South West Digital Educators will take place on July 2nd 2013. Keep an eye on www.digitaleducators.co.uk for details.

Live blogs from this event:

Oliver is on the organising committee for the South West Digital Educators Conference.

3 thoughts on “A Child’s Place in a Digital World: South West Digital Educators 2012”