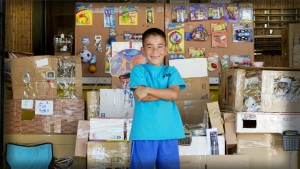 “Children will create as well. Whether order or disorder, chaos or harmony, beauty or ugliness, accord or violence, they will create. We all begin life with a will to leave a mark no one else has left.”

When I was a child I loved to make. Whether it was dens, cardboard replicas of ‘Thunderbirds‘ ships or manically noisy radio shows, I loved making things and sharing them with people. As I explained in this guest lecture last year at Plymouth University, I feel indebted to my parents for giving me the time, space and resources for making because it led to me learning so much and has led me to do much of what I am proud of today.

Sometimes it seems like many children miss out on this freedom to learn through making, so I was heartened when Ewan McIntosh tweeted a link to the wonderful film ‘Caine’s Arcade‘ this evening. The film is to some extent framed around the power of flashmobs and social networking, but I actually found the first half the most magical. It tells the story of an ingenious ‘maker’, a young boy driven to make an idea a reality. He is learning along the way too, look out for the ingenious ways he achieves giving out tickets, creating a ‘claw’ machine, and most ingenious of all; the way he verifies authentic ‘fun passes’.

I’m giving too much away already… take a look and revel in the touching story of the power of giving children the space, the encouragement and the agency to create something positive…

Wired magazine catches up with Nirvan Mullick on the effects of the film going viral.