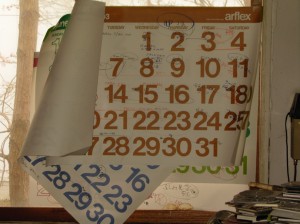 All things considered, it has been quite a year. Certainly some of the most intense learning of my life has been packed into these 12 months, with big changes in my thinking, my career, and even my home. Here are my highlights, as they were blogged.

In January I went to Learning without frontiers conference, and had my mind opened to the world of disruptive innovation in education.

I presented at TeachMeets there and at BETT on the work I had been doing on independent learning, and the reactions of some great role models of mine got me thinking about my future directions.

This month I started to notice my work on collaborative and independent learning with my class paying off, with children using Google Docs to structure their collaboration.

I also published my thoughts on ‘The Purpose of Education‘, and started ‘live blogging’ at a TeachMeet in Lutterworth.

I spent much of March considering the role of leadership, as a result of some work for the National College. I reflected on whether we should accept models of leadership are going to be messy, but play that messiness to it’s strength to create a ‘Jackson Pollock’ model for school leadership.

April was all about using technology to facilitate a collaborative learning culture with my year 4 class, with Google Docs allowing them to evaluate work together and other tools facilitating them creating and shaping their own learning environment online.

In a prolific month on my blog I documented the wonderful story of my pupils’ ‘Exciting Sentences’ video series, did my first keynote at Plymouth University, got TeachMeet on Facebook, and reflected on the importance of encouraging children to take things apart.

June saw me join a team developing social media in Birmingham schools, wondering whether it was the tools or the thinking that are most important. I continued to develop my thinking around independent learning, and was offered a new job at Plymouth University.

Knowing I was leaving school, I reflected on the immense possibilities that children see in everything. The end of the academic year saw me packing up my classroom and leaving Robin Hood Primary School, with an equal mix of sadness and excitement for the future.

In between jobs, the summer was a great time to reflect on deeper issues around the learning with my class, considering the importance of creating ‘problem finders’, and encouraging children to learn about their interests in depth.

September saw my thoughts provoked by TEDx London, but also by my now adult students and their enthusiastic embracing of social media for learning as I settled in to my new job at Plymouth University.

Two months in to my new job, I reflected on my transition from Primary to Higher education. I also joined a team to start a business in 54 hours, and learnt some lessons for education from the world of business in the process.

In December I continued to reflect on my experience of business culture, developed my thoughts on questioning as a result of observing trainees in school, and was spurred on by my students’ blogs to reflect on the reasons why I became a teacher.

Here’s hoping 2012 will be equally challenging, exciting, and enjoyable. There is some great stuff in the pipeline, and undoubtedly more hiding just out of sight around some corners…

2 thoughts on “Learning highlights for 2011”