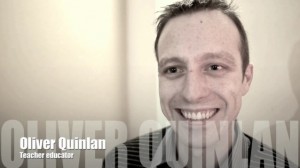 This week I was interviewed by Ewan McIntosh as part of ‘Tweeting for Teachers‘, a report produced by NoTosh and Pearson CPL on social media use for the professional development of teachers. The focus of my interview was around ‘long form’ engagement with social media through the medium of blogging, and how I think it can be hugely valuable for professional development.

“What you want is for people to criticise you.”

In the last week this phrase has really rung true, and two of my last three blog posts have been edited as a result of conversations they spurred; conversations which brought on my thinking beyond where it had been when I originally wrote the posts.

The most recent was my post on Cummin’s Quadrants model for thinking about relevance in lesson structure. I have been using this model in my thinking for some time, whilst recognising that it is a model to be adapted and not necessarily followed to the letter. Having published the piece, Dr Mark Evans got in touch on twitter criticising the piece for being too linear and not taking account for differentiation.

I could have simply taken this criticism, or ignored it, but I decided to engage directly with it, and started a conversation that made me realise I needed to nuance my explanation somewhat. However, it also triggered some deeper thoughts that I had not had, and got me wondering whether the model was implying that the object of our teaching should be to get children eventually working on totally abstract problems; something I would not agree with. I updated the post and now I think I have not only produced a more useful piece, but I have actually deepened my thinking on the issue.

The second piece was the one I wrote on an episode of ‘Educating Essex‘, where I originally strongly criticised head teacher Vic Goddard for the way he approached a pupil’s request to work on a novel. Several people responded in criticism to what I had written, including Vic himself, and through engaging in conversation with him I realised I had done him a disservice in what I had written. However, the strong reactions to my piece made me realise that the issues did not lie with Vic personally (he was actually far more supportive than the edited TV version suggested), but with the wider systems that make it impossible for us to imagine a child being given school time to work on a novel. Once again, I changed something which was an error, but also through engaging with the reactions to it managed to deepen my thinking around the wider issues.

This is why I think it is worth not only taking the time to blog, but also growing a thick skin and engaging with people who criticise you, because often these are the people who bring your thinking on and support you to learn. More thoughts on why I think blogging is so valuable in the video…

3 thoughts on “Criticism: The value of blogging?”