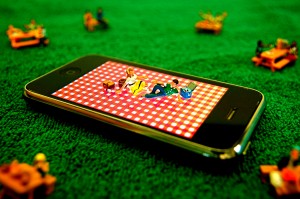 In 2007, in an article on ubiquitous computing, Kramer and Mirlacher shared a vision of a possible future. In this future pervasive, interconnected and mobile computing came together to provide a networked learning experience. When I read this in 2009 with my MA cohort many of them were taken aback but, aside from some existing technology that hadn’t been implemented yet, their vision looked pretty familiar to me.

“While performing her daily morning routine Student X glances at the display of her Internet enabled mobile phone to see if there are any changes to her academic schedule that day and to see whether there are any messages or updates to the courses she is taking.

On Student X’s commute she reads the paper and comes across some concepts she is not completely familiar with and consults some academic resources on the Internet through her phone. Upon arrival to campus she glances at her mobile and informs herself as to whereabouts of her colleague on a map that indicates the presence and global positioning of her friend.

Student X and her friend are just about finished with their paper, but they both realize that they will be late for their lecture, so they logon to the University media server on their mobiles and begin to listen to a live audio stream of the lecture over their Bluetooth headsets, while making their way to the lecture hall.”

I shared this vision with my students today, in a time when it is looking ever closer to the reality of the modern University experience. A lot of this technology has been around for some time, and much was around in 2007 when the paper was published. I began to wonder what it was that could cause such future gazing to become so familiar in such a short space of time, then I remembered something else that happened in 2007…

In many ways the iPhone wasn’t technically that revolutionary, for some time mobile phones had had the capability to check email, browse the web, take photos, download maps. Yet it managed to change everything, lots of other devices are catching up now and even surpassing it’s capabilities, but the original iPhone undoubtedly changed the game for everyone. Why? Because it focused on user experience.

The technologies may not have been that new, but as a product it put the user at the centre so they could make the most of them in a way most never had before. I shared this story with my students today, because I think the analogy works for a lot of practice in schools in terms of technology enhanced and technology influenced learning. We have all this stuff, but we still haven’t found the metaphorical iPhone; the tool that changes the game entirely for learning.

No one could ignore the iPhone because it leveraged the power of putting user experience at the centre of everything it did. More and more I think that harnessing the power of existing technologies in learning has little to do with the technologies themselves, and everything to do with putting the ‘user experience’ first. Perhaps the ‘iPhone of learning’ would not be a thing, but an approach or a structure that puts the learner experience at the very centre.

What do you think a metaphorical ‘iPhone of learning’ could look like?

1 thought on “User experience & the ‘iPhone of learning’”