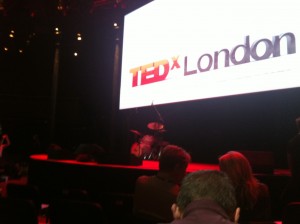 Last year Sir Ken Robinson used a TED talk to call for a ‘learning revolution’, and yesterday afternoon saw a wide variety of interested people gather at The Roundhouse in London to discuss the potential of this revolution and what it might look like.

To me there were three important themes that seemed to run through many of the talks; relationships, relevance and a need for a less polarised debate around education.

Sir Ken Robinson’s opening video set things off, stating that we needed a ‘back to basics’ approach to education, but that the true basics lay not in particular subjects or skills, but in the basic relationship between learners and teachers.

Several of the talks centred around these relationships, with Dan Roberts showing us the potential for ICT to amplify the effect of his choice to allow learners to follow their interests, Geoff Stead demonstrating how mobile technology can bring people together, and Emily Cummins’ moving account of how her Grandfather had inspired her in her learning.

The theme of relevance was also strongly felt, initially from 14 year Georgia Mills calling schools to acknowledge they are only part of the varied picture of young people’s learning. Later, Sophie Bosworth described her work in promoting vocational paths as a means of providing relevant learning, and decried the number of her friends who have chosen to do degrees not because they have relevance to their lives, but simply because that was the only path promoted to them as valuable. A video message from musician Goldie continued this theme, as he discussed how he rejected a formal education he saw as irrelevant to his life in order to learn from the culture of the streets; an interesting theme I want to pick up on in a future post.

To my mind it was Ewan McIntosh‘s talk on ‘Problem Finders’ which tied all the themes of relationships and relevance together. With reference to his own ‘TEDx Kids project’,  Ewan showed how a design thinking approach to learning can be used to stop teachers from doing all of the ‘hard work’ of learning; actually finding and defining the problems.

This changes the relationships between both parties, as teachers are no longer exerting such tight control, they can be truly responsive to learners. Shifting this relationship has the side effect of achieving the relevance that was so often talked about at this event; if learners are finding the problems themselves rather than being presented with ‘pseudo problems’ by teachers, then how could their learning ever lack relevance?

Ewan’s message was simple, but it stuck out for me amongst many attempts to inspire change because it not only inspired, but explained how to approach that change, and showed examples of how it can, and has worked.

A parallel theme that cropped up was the nature of educational debates, which was defined by Professor Ken Spours as unhelpfully polarised. He argued that rather than seeing polar opposites in education such as the debate between knowledge and skills, or control and creativity, we need to recognise the importance of both sides and “move from the world of  ’versus’ towards a world of ‘and’”. Nothing communicated this to me more than musician Tim Exile’s performance, when he showed that traditional mastery of technical knowledge and skill can facilitate astonishing creativity, and does not hold it back (more on that here).

This sat alongside some bad feeling about the TEDx event from some sections of the educational community (see here and here), with accusations of TED events being exclusive, based on self promotion, and lacking in audience participation or action. Just as the current educational debate holds a cornucopia of issues, so does the manner in which that debate is conducted. There are platforms, such as Purpos/ed, which are perhaps seeking a more democratic, grassroots approach, an approach which some may say is better suited to a discussion of education. However, I wonder if all of the contributions to this debate should be sited in a world of ‘and’ rather than a world of ‘versus’.

The TED format is simple and effective, it provides inspiration and thinking to spark people to action. Emily Cummins’ called for providing young people with sparks, and this event was intended to be just such a spark. We need other events and structures in place to turn those sparks into action, but as a platform for providing inspiration and spreading the message for the need for educational change, the TED format makes a strong contribution.

Relationships, relevance, and the need for an educational debate that is focused on coming together rather than polarisation, TEDx London had much to contribute to the current educational debate. It was also refreshing to hear accessible debate around education that was not totally skewed towards economic factors, as much of the public debate in this country often is.

Is there an ‘Education Revolution’ coming? It depends on whether some of the inspiring ideas featured here, and the many others that are out there, can be put into action. To achieve this requires getting more than just educationalists on board and this should be helped by both the varied audience here, and the power and accessibility of the TED brand. The biggest challenge is getting everyone involved in the debate, as most of the ideas on show here were not just about educational change, but also significant cultural change.

Getting all sections of society engaged in a meaningful, open and honest debate about the future of education; that would be a revolution.

My live blogs of many of the talks are here.