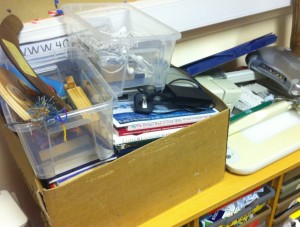 It’s a funny feeling packing up a classroom you have inhabited for a few years for someone else to move in. Over the last 24 months I have built a space with the children I have worked with to try to reflect the way we worked, and disassembling that seems very strange.

Some things that are taken apart were there by design, some just seemed to evolve. Some things worked really well, some never quite got there, but they all contributed to our learning in some way. The best laid plans, adjusting things as you go, and some genuine mistakes, both good and bad in results- it seems that is just how learning works.

As I said to my class this afternoon, I have never learnt more from a class of children than the group that left me today. They have pushed me to think in so many ways, and shown me just how powerful children’s interests and motivations to learn can be.

On Tuesday afternoon, we had some time for them to finish off various projects they had been working on. At the end of the day a group told me they had a surprise, and explained that myself and our teaching assistant needed to leave the room. We were guided back in to them singing the ‘Wedding March’ (apparently they thought it was just ‘announcement music’), and sat down at the front to be presented with cards they had made, and treated to speeches from many of the class about their appreciation of their time in year 4.

As teachers we are used to groups of children being sneaked out by a TA to make us cards, each drawing a picture that is assembled by an adult and laminated into a sanitised version of their appreciation. The intention is good, but it isn’t entirely their intention.

What struck me about this was that adults had nothing to do with it. They had swiped the card they needed from a store somewhere, decorated it in secret, and organised the collection of everyones signatures before presenting it to me.

The fact that they did that means more to me than any shop bought present, because it shows they have developed something I always aimed for. I can’t take all the credit, they have had great teachers before me, and many wonderful families that support them, but one thing I have tried to do is give them the permission to be themselves, and contributed to building their confidence to make things happen.

This feeling was all the more powerful as today sees me leave my classroom in a broader sense. In September I move to Plymouth University as a Lecturer in Education. A big change, but one thing I know will not change is my ambition to help learners to develop their own futures. Whether directly in the form of working with soon to be teachers and those in schools, or indirectly by the effect they have on the learners they work with, I want to make a difference in the best way I can.

I have in mind some plans, I am sure I will have to adjust them as I go, and I know I will make some mistakes, with both good and bad results. Two years ago I couldn’t have imagined I’d be here. I can’t imagine where I will be in two years time, and that feels good. What I don’t need to imagine is that I will be learning, because that is what I am about.

32 thoughts on “Packing up my classroom”