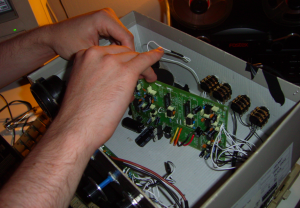 The interview process for my current job was somewhat unorthodox. On top of the standard observed lesson and interview, we were asked to prepare a three minute ‘dragon’s den’ style presentation on our own creativity, and how we might encourage others to be creative. I chose to present the story of how a friend and I had taken a touchscreen shop till to pieces, reverse engineered it and turned it into a musical instrument for performing on stage.

This may appear a strange story to tell when applying for a job as a school teacher, but the point I was trying to make is that technology is not a sealed box. What I hoped to get across was that I hoped to encourage in children an ethos for deconstructing technology, and not being afraid to use it in ways it was not intended in order to get creative results.

I made a point to explain I was not planning to encourage children to take apart electronic appliances, however it appears I spoke too soon..

Sometime ago a group in my class were editing a video using iMovie, and they decided they wanted some music in the background. To achieve this they found the music they wanted using youtube on another computer, physically moved the two machines closer together, and enlisted another child to bang a drum to signal when they should press ‘play’ on both computers. Of course they could have achieved this on the one machine in the software, but they didn’t know how to do this. What is key to me is that they did not feel restricted because they could not achieve what they wanted with the single tool they were using. They used the technology in an unconventional way to achieve the end that they had in mind, and to me that is more creative than restricting your thinking to the software package that is in front of you.

This week Tom Barrett shared a great TED talk by Gever Tulley, founder of the ‘Tinkering School‘, and I found point 5 particularly interesting:

powered by Splicd.com
Watch ‘Five Dangerous things you should let your kids do’ in full here.

This concept of ‘knowability’ is powerful, and what I was trying to get across with my ‘dragon’s den’ presentation. However, thinking about this today I wonder if there is more to it than a confidence with the sealed boxes of appliances, could it be applied to ideas and social systems?  Traditions, rules, school systems; we take so much of how our world works at face value. Perhaps encouraging young people to deconstruct and question a bit more to reach that ‘knowability’ could lead to a powerful shift in their sense of agency in the world.

As with the appliances, this sounds like a dangerous concept. However, taking things apart is not about destroying them, but getting to know them better. Reaching that ‘knowability’ might be what is needed for young people to take control of systems they find themselves in and, like the children with their two computers, move their thinking beyond the perceived constraints and into using them to creatively achieve the desired results.