My development of using google docs for writing with two different classes has unequivocally shown me one thing; children have a drive to collaborate on and share ownership of their learning. In the last few weeks my class have taken this sharing to the next level; using it to support each other in their learning.

Having done much work on using google docs to ‘live mark‘ and intervene at the point of learning as a teacher, more recently I have been developing my use of it as a tool for peer marking and assessment for learning.

The children in my class have been keenly sharing their work with each other all year, but this has largely been a case of sharing work once it was completed for comments and praise. I was keen to capitalise on this drive to share what they have done, and incorporate it earlier on in the learning process.

We recently completed a unit on ‘Historical stories’, and wrote the final piece based on a trip we had to a local water mill. During this trip children dressed up as apprentices, and were shown round by a member of museum staff who maintained a convincing role as the Miller. The combination of this role play, and the chance to explore a location steeped in history made for some great ideas for stories which were, as the unit required, realistically set in a historical period.

We went through a planning process involving some drama sessions with Fiona King from Birmingham REP theatre. Then the class wrote their stories straight into google docs, whilst I monitored their work and added comments as they were writing to intervene at the point of learning, as I have written about before, and sharing examples on the board for the class to assess against the success criteria they had defined before writing.

Once the first drafts were finished, we moved on to peer assessing and redrafting. Previously children had been commenting on work in a very supportive, but quite unfocused way. This time I wanted to make sure that their comments were focused enough to benefit each other’s learning, so I produced a review sheet based on the success criteria. On this sheet they had to locate and record examples of each of the success criteria, as well as giving praise and some more general pointers on how to improve. 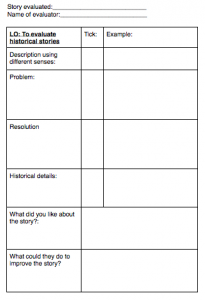 We began, and the children enthusiastically started reading each other’s stories. When I came to monitor what children were doing, what I found was quite interesting. Rather than swapping their work as they might have done if doing this using books, I found most of them were choosing to keep open their own work whilst their partner was evaluating it, often sitting beside each other and discussing the evaluation as it happened, or using the chat feature to do so. When someone provided them with feedback they agreed with and though was useful they often made the changes there and then, and then asked their partner if they had sufficiently improved it. 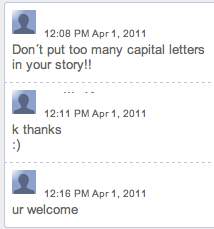 I also found that many of them were not actually using the sheet I had given them to record their evaluations. However, on closer inspection this was usually because they found this superfluous, as the commenting system in google docs allowed them to locate the exact example, highlight it and add praise or criticism in a much more direct way. Whilst not using the sheet, in most cases they were using it for reference, and their comments were in general much more focused, not just in terms of points for improvement, but also in their praise. 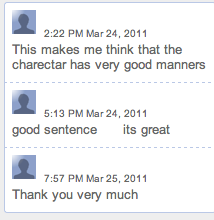 This way of work was different to how I had envisaged it, but it was largely superior, as children were actually having sustained conversations about the effectiveness of their writing rather than just handing each other pieces of paper with ticks and crosses on.

Another interesting development was that due to the odd number we had in school that day, some children chose to work in groups of three. In one case I found two children commenting on one piece of work at once, with the author replying and editing their work as they went along. Comments were not always agreed with, and the two evaluators were sometimes asked to justify their comments, or adjust them when shown an example of where the success criteria had been achieved later in the work.

What was really interesting is that the author then made an addition to the credit at the end of their work to include the commenters as ‘editors’. Such recognition, I think, demonstrates just how useful the activity was, in a way that moved beyond a ‘paper exercise’ completed for their teacher.

There is still work to be done, not all of the commenting was so productive, and some need more guidance to make the most of this potential. However, I hope this shows the power of harnessing the drive for sharing that these children obviously have, and allowing them to develop their workflows in ways that have meaning for them, rather than being defined by their teacher.

I don’t know what direction this will take next, but I have a feeling that I don’t need to. Keeping one eye on the required learning, one on the desired learning, and letting the children find ways to satisfy both seems to me to be the key at the moment.