The programme at ‘Developing Leaders for Tomorrow‘ last week encouraged us to question models of school leadership, and several keynotes highlighted the diverse and increasingly complex hierarchies that are emerging in schools. However, some schools are deciding that hierarchies for development are not the answer, and recognising the power of ‘ground up’ leadership of learning.

In his keynote, Andrew Jones shared an interesting analogy for thinking about leadership models. Such models are often depicted in the form of neat coloured boxes in a hierarchy or workflow- and we saw several such diagrams during the day depicting complex, but highly organised visions for collaboration right up to local authority and national level. 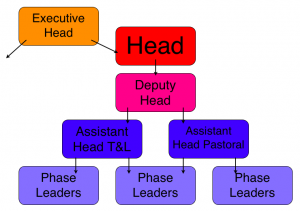 The problem, as Andrew put it, is that whilst much time, effort and money is spent on defining these organised models, the reality of practice on the ground usually ends up looking more like a Jackson Pollock image.

It always seems to me that teaching is an unusual profession in that the power for what actually happens in terms of learning is entirely mediated by the bottom rung on the ladder- the classroom teachers. One only has to look at the implementation of synthetic phonics in the English system to see this.

Despite national investment in a closely defined and prescriptive strategy for teaching early reading, the actual experiences of children, and resulting attainment, remains variable. The reason for this? Teachers do not do what they are told. The very nature of the profession means that they mediate and modify their practice based on their own ideas of how things should be done, and how their pupils need things to be done.

Such interpretation is undoubtedly largely taking place for what are perceived to be the best interests of children. However, this responsiveness is hugely undermining to a rigid model such as synthetic phonics. Even small changes in practice- for example streaming children instead of following a model of whole class teaching- can change the core purpose of such a programme.

“When the door closes … on your classroom, you are the education system so far as those kids are concerned”

If this is happening at the business end of the profession, I cannot help thinking it is likely to be happening across many of these leadership models. Our neatly ordered hierarchies are actually producing a body of Jackson Pollock reproductions that any art gallery gift shop would be proud of.

Sir Ken’s assertion may appear revolutionary and encouraging of teachers to disobey the systems imposed on them, but in reality interpretation is such a huge part of the role, anyway that such ‘disobedience’ is endemic. Imposing rigid systems on professionals who widely feel that creative interpretations of them is their calling seems woefully unproductive in terms of leadership time. It can also have the resulting effect of disillusioning the creative professionals who are likely to be most responsive to the needs of their learners.

Recognising this, some schools are taking a different approach to the way they think about developing their organisation. At Robin Hood Primary in Birmingham, previous headteacher Neil Hopkin instituted an approach to teacher development based on the model of coaching. Rather than top down targets, this involves a genuinely collaborative process where staff identified and worked on their own strengths and areas of development. Supporting this process were training sessions for the whole staff by Malcolm Hurrell, an experienced leadership coach from the business world.

Taking a different approach, Headteacher Michael Shepherd writes of a group of schools that have come together to form the Kaizen Network. These schools share INSET days and work in teams of professionals from across different schools. Key to these forums in that there is “no top down remit”, and instead staff are encouraged to find key areas of interest, and take their own paths towards developing their practice.

Such models recognise the power of letting individuals own the process of their own development, and creating a culture of self development and self organisation that must have significant effects on the pupils. Undoubtedly they require significant shifts in mindsets of both ‘leadership’ and staff, but imagine the power of strategies that are so driven by relevance as to remove the problem of creating whole school ‘buy in’. Surely, if well implemented, this would allow far greater scope to drive learning by focusing on what is actually needed in that context rather than as only a part of keeping the broader picture neat.

What if that Jackson Pollock was not simply a mess of ‘badly’ interpreted top down policy, but something that had been carefully put together by those in context to best fit themselves and their learners? Now that would be a work of art.