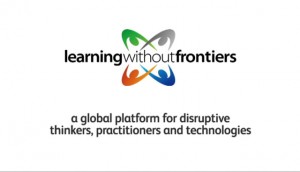 Last week I was fortunate enough to attend the ‘Learning without frontiers‘ conference, a coming together of people from across the education sector with an agenda of exploring how education needs to develop, with particular reference to new technologies. The event had me engaged and inspired from start to finish, and I have come away reflecting deeply on how I am approaching both my teaching and my learning.

The conference had a particular focus on Handheld and Gaming technologies, as it had resulted from the coming together of the ‘Games Based Learning‘ and ‘Handheld Learning‘ conferences, but it’s remit was far wider than that, focusing on future visions of learning, even beyond the concept of formal education.

In his introductory talk conference organiser Graham Brown-Martin set the theme of ‘disruption’ firmly on the agenda, and this ran through much of the event. Whilst the obvious thread to this is the disruption of traditional pedagogy through the influence of technology, the theme was expanded far beyond this. We heard from Evan Roth, an artist who has set himself the goal to be the top google result for a certain expletive laden quote from ‘Pulp Fiction’. His anti-establishment art projects showed a side of disruption that some at the conference were quite uncomfortable with.

I think there is a very important debate to be had on the theme of disruption in education. It is easy to expound the virtues of encouraging young people to be disruptive thinkers and to question, but harder to accept when their questioning and disruption turns on the authority that schools and teachers are currently intertwined with. As a teacher trying to encourage independent thinking I have seen the conflict this can create within what is still a rigid school system, and at present it is all about balance. It is all very well to encourage people to be independent thinkers within the constraints you decree as a teacher, but really independent thinkers are disruptive. As George Bernard-Shaw put it; “All progress […] depends on unreasonable people.”, and I think to move forward we need to prepared and accepting for pupils to be unreasonable.

Another strong theme was the evolving nature of digital content, particularly books, and what form they should take. Theo Gray from Wolfram Research, creator of acclaimed iPad app ‘The Elements‘, expressed his opinion that traditional publishers had killed their business model through overpricing. He explored the idea that digital books needed to be something fundamentally different to traditional books, and not just digitized versions of them. This was something that Lord David Puttnam echoed the following day, where he argued that merely digitizing our present curriculum simply gets the same results, perhaps a little faster. What he argued we needed was a new direction, recognizing the strengths of digital content, and frankly the strengths of our learners.

There was also discussion of the ‘free as in beer‘ culture that has grown up around digital content, and authors such as Gray were unapologetic in their stance that they needed to make a living out of content creation. He argued that the resurgence of ‘walled garden’ distribution in the form of applications like Apple’s iBooks represents an opportunity to reinstate the financial incentives necessary for high quality content to be brought to learners.

This discussion of evolving digital content was given another slant by Dr William Rankin, who explored different models of literacy and their characteristic features. He argued that the act of reading had in some ways come full circle from the communal, shared experience of the Medieval literacy, to individualised reading through publishing, and back to a shared experience with new digital media. The difference between these models is the level of access, and the accessibility of content now, coupled with the shared experience is very powerful. He also shared some fascinating statistics about the unexpectedly high cognitive level of participation in online role play games.

I have never had a huge affinity with computer games, and though I see some people doing some excellent work, ‘Games Based Learning’ is not something I had engaged with in depth before this conference. On the second day I attended some excellent sessions, which made me once again consider using computer games for more than simply engaging pupils.

Dawn Hallybone demonstrated some great practice, and I was fascinated by the ideas in Derek Robertson‘s presentation. His method of pulling apart the facets of games showed what makes them so engaging, and structurally so suited to learning. The elements of dynamic ongoing feedback, incentivized learning experiences, using meaningful profiles and purposeful and relevant experience, are all as relevant to non-games based learning. He expertly put across the point that a ‘Games based’ approach to learning is very sound, and we perhaps have much to learn from imposing this model on the learning experiences we design as teachers. Dereck works for ‘Learning and Teaching Scotland‘, and I found his approach of ensuring adoption of games based learning across large areas in a co-ordinated and sustainable way very refreshing. Although there are undeniably pockets of excellent practice in England, I think we have a lot to learn from LTS in terms of ensuring sustainable adoption of such pedagogy.

One of the biggest themes for me was that of ‘participation culture’, and the fact that schools need to wise up very quickly to the power that this already has. Despite most of the sessions I attended being large scale talks focused on one person, almost every attendee was participating through some form of digital medium, such as twitter or live blogging. When people in the room had an opinion it was heard, and in some cases had influence immediately.

Had Culture Minister Ed Vaizey‘s talk been to a different conference, there might have been a few sideways glances, or whispers of dissent. At this one people’s opposition to him was widely shared, and I was very impressed with the fact he checked the twitter stream on his phone, and answered questions raised, as well as reading out a very negative opinion of him posted by someone in the room. The participation back channel also functioned in less conftontational ways, sharing links to examples speakers were citing, and allowing us all to come to a shared understanding of what the sessions meant to the wide cross section of the education system represented in the room.

This participation culture is increasingly evident in our learners, and it is worrying that many schools and teachers do not engage with it, and even try to stand against it. Stephen Heppell shared some examples from history demonstrating that “People plus technology breaks cartels”, and I felt that many in the room shared his opinion that the next cartel to be broken could well be the formal education system in this country.

Despite the fact that many in education would find this point of view quite worrying, Stephen set a challenge to the conference that as leaders of this kind of learning we are not articulating how good this future might be. Set to a backdrop of the current funding crisis and a decade of investment in school I.C.T. that has apparently had little impact, Stephen stressed that it is the people using the technology that makes the difference, and that we need to be transforming learning processes not just augmenting them with technological tools. If so, he argued, the next technological paradigm shift after those we have seen in hardware, software, databases, search and now social uses, could be learning.

I came away enthused with the ideas and potential of the people at Learning Without Frontiers, and the wider movement of ‘technologically aware educationalists’. This was made all the more exciting by the great reception of my talk on ‘Changing classroom relationships‘ at the TeachMeet session, and later in the week at BETT. To present on a challenging pedagogical point of view and be met with such warmth and support from so many people I respect was incredibly encouraging, and I came away with the feeling that this is a very exciting and challenging time to be involved in the business of learning.

Videos of the keynotes from the event are available on YouTube here. Links to those mentioned are below in the order they appear:

8 thoughts on “Reflections on Learning Without Frontiers 2011 #lwf11”